Nine One One by Scarlet Blackwell is a short novella that is filled with emotion, heat, and characters I really enjoyed reading about!  This book was previously released by another publisher. It has been revised and re-edited for release with Totally Bound Publishing and I received a copy at no charge in exchange for my review.

Nine One One by Scarlet Blackwell 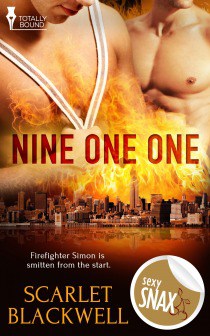 It’s ten years after the horror of 9/11. Former NYPD cop Damon Summerfield was there. He lost his firefighter partner, Justin, in the collapse of the Twin Towers and fled to Canada to attempt to rebuild his shattered life. Now he is back in New York for Christmas with his family for the first time since his loss.

Still deep in mourning with no end in sight, he visits Justin’s favorite bar near Ground Zero and there meets Simon, a firefighter with the FDNY and a fellow survivor of 9/11. Simon is smitten by him from the start, but despite feeling the same way, Damon can’t bear to give them a chance, not when he thinks Simon’s job will tear them apart someday too…

Nine One One begins with a look at Damon’s pain over losing his partner Justin in the collapse of the Twin Towers.  Justin was a firefighter and a perfect match for Damon, the cop.  With his death, Damon has shut himself off from everyone emotionally and retreated to Canada.  He has not been with anyone else emotionally or physically since Justin’s death.  He comes home to New York to visit his parents but is just biding his time until he can go home to Canada and be alone again.  He doesn’t count on a chance encounter with Simon at a local bar.

Damon hasn’t felt attraction to another man since Justin died and his reaction to Simon scares him.  He is just beginning to consider giving in to desire when he learns that Simon is a firefighter.  The mere idea of being with another fire fighter terrifies Damon and he abandons his plans.  Fortunately, fate steps in and throws Simon in his path a few more times until he finally gives in to his libido and they hit the sheets.  The results are nothing short of spectacular but circumstances leave Damon in tears.  Simon and Damon have a few hurdles to overcome after that but they get their ‘happy for now’ by the end of the book.

I loved that the author wove bits of Justin and Damon’s relationship into the story and the details of some of the ‘flashbacks’ to September 11 are emotionally upsetting even to ME who did not have to live through that terror.  Through those glimpses into the past, Ms. Blackwell weaves a very emotional story and half way through the book when Damon was crying in the bathroom I found myself crying right along with him.  There were times I wanted to throttle both characters but was thrilled they managed to figure things out relatively quickly.  The heat between Damon and Simon is off the charts even if it was filled with a little bit of sorrow and anger at times.

Nine One One shows us Damon’s emotional journey from losing someone he loves to finally grieving and moving past his loss to a new life.  His and Simon’s relationship started out a bit rocky but Simon is determined to help Damon heal and learn to love again.

If you are looking for an emotionally and physically intense read, Nine One One is a great choice!