In One Night with Rhodes by Eden Finley, Garrett’s denies his true desires to everyone, including himself but Blair will eventually tempt him out of the closet. One Night with Rhodes is Book 4 of the One Night Series but can be read as a standalone story.  I received one copy of this book at no charge in exchange for my honest reviews but all opinions expressed here are my own.

One Night with Rhodes by Eden Finley 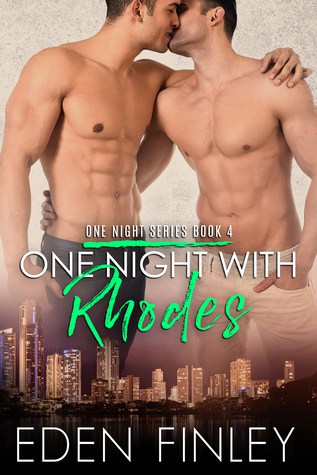 Title:  One Night with Rhodes

Learn more about Eden Finley by checking out the author’s website .

One Night with Rhodes by Eden Finley Blurb:

Blair Rhodes considers himself an equal opportunity player. He knew from a young age that he wasn’t entirely straight. Ogling his best friend’s older brother was the first thing that tipped him off. But Garrett Erikson is off limits. Always has been. Garrett is as straight as they come.

Garrett’s reputation as a womanizer precedes him, but it’s not who he is. Not even close. And when Blair turns up on his doorstep, heartbroken over a breakup, Garrett knows it’s a bad idea to go drinking with him.

One night is all it takes for everything to change.

For the past ten years, Garrett’s denied his desires to everyone, including himself.
And as much as Blair wants to be the guy Garrett needs, he needs to protect his own heart. Like his ex-boyfriend always told him: “Never mess with the straight ones. It only leads to trouble.”

One Night with Rhodes by Eden Finley Review:

One Night with Rhodes by Eden Finley is Book 4 of the One Night series.  It can be read as a stand-alone story, however, to really understand all the other characters you should probably read the other books first.  I have not read any of the other books and while the story line made sense, there were definitely personal dynamics in the group that I didn’t really get.

To summarize, Blair is bisexual but doesn’t think his coming out went very well.  His friends seemed a bit weird about it so he really doesn’t mention any of his same-sex hookups.  His parents didn’t really take it all that well, either, which is an issue he has to deal with by the end of the book.  He has always had a bit of a crush on Garrett but assumed he was straight.  As the older brother of his best friend, he was pretty much off limits.

Garrett acts like a womanizer but is totally hiding, denying, and trying to ‘get over’ his very real desire for other guys.  Blair turns up on his doorstep heartbroken and one thing leads to another and they end up naked.  Garrett doesn’t deal with that very well and they have an on again off again fling for years.

So, the story basically starts and ends at the same point in time with the middle of the book being about the journey they took to get there.  It is a bit meandering at times and I did find myself losing interest at times because the story spans many years.

Garrett has some serious issues about coming out of the closet.  Yes, he has a good reason, which you will learn about during the meandering journey of his life.  But, even before a guy he was dating suggested it, I really thought he needed some serious therapy.  He gets the help he needs at the end of the book and you do get a happily ever after between him and Blair but there is a TON of angst in the middle of the story as he tries to deal with his issues.

These characters are not actually ‘together’ for most of the story.  They are friends…they are lovers…they hate each other.  Honestly, they bounce around quite a bit.  Both characters date other people, although all the ‘other’ relationships are pretty much off page and discussed very generally.  I did feel that the other relationships they were in actually took up more of the book than the actual relationship between Blair and Garrett.  I would have liked to see the focus be more on their relationship, although this was a book of self-discovery I think rather than actual romance.

You will switch perspectives as you move through the story.  It was nice getting both characters points of view.  They both have their own emotional struggles to deal with when it comes to their sexuality and they were both given equal focus in the story.

Overall, this was a fairly good book.  I think it dragged a bit and I wanted more of these characters together and maybe a little bit less angst but in general, it was a solid story.

Books in the One Night Series by Eden Finley