Osaki by Remmy Duchene  is book two in the Shivers series.  It is best read in order as part of the series.  Check out the blog tour and excerpt below and then enter Totally Bound’s April blog tour competition for the chance to win any eBook of your choice, not including boxsets or anthologies. 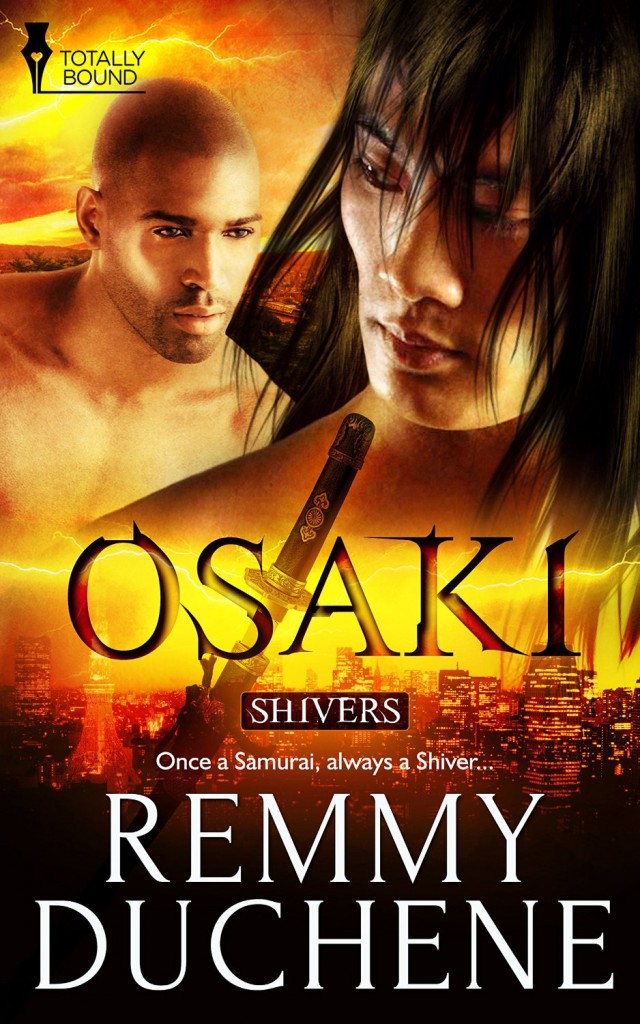 This is book two in the Shivers series, see the full series listing here

Once a samurai, always a Shiver… Kofi Olabasu needs a vacation. He’s spent so much time looking out for his brother and working that he’s completely neglected himself. To make matters worse, feelings for a man are driving him crazy. The moment Kofi feels Osaki, he knows something is about to change. Confused about his attraction to Osaki, he agrees to take a vacation and accepts Osaki’s offer of being Kofi’s tour guide in Japan. However, nothing is as it seems. Soon every dark corner is filled with danger and those who wish to do him harm. Osaki has a lot on his plate and love is the last thing he has time for. Not only does he have to get used to his new powers as a Shiver and all the training it involves, but he also finds himself being drawn to a human—though Kofi makes it clear he’s into women—and Osaki must respect the man’s wishes. All Osaki really has to do is focus on training and being the best tour guide possible for Kofi. But nothing ever goes as planned and soon rogue Shivers are popping out of the woodwork, hell-bent on destroying Osaki for his inheritance. It soon becomes quite clear that they want him dead, and they’re not afraid to use Kofi as leverage—or as collateral damage.

From Remmy Duchene about this book:

Why do my characters have best friends

I learned everything that is important about friendship from Care Bears.

Seriously—friends are there for each other. Friends are honest. Friends make you laugh when you’re sad. Friends tell you when you’re being an ass. Those are some of the most important things to learn about friendships.

Why Care Bears? Well, for the first 13 years of my life I was raised by a single father. He was working most of the time and with him gone, I had to learn things in order to teach my sisters. So, I watched Care Bears and picked sense out of nonsense. As an adult, I try my best to be a good friend—to have in me the important aspect of friendship. And, I put that idea in my characters too. For those of you who read me regularly, you see—each of my main character has at least one friend (or a sibling) who is there for a hug or a smack against the back of the head—depending on what my character needs.

Friendship is a very important thing in my life—this goes to writing what I know. I take great pleasure in giving my characters these shoulders to lean on, at least one constant love that is there even when my main characters don’t like themselves. I think we all need that in our lives; especially in these times when things are so hard for most. There has to be that one safe place —outside of our spouses and parents —who we can go to and curl up in their arms for a good cry. Or even if it’s to go out for a few drinks, or text and say “I had a bad day,” and they will invite you over and make you pirogues and watch Jurassic Park with you even though they’ve seen it a million times before, but they know that moment together brightens your day. I have this in my best friend Tster—she’s been my constant, encouraging light in my life.

In OSAKI, both he and Kofi are surrounded by people and Gods and Goddesses who would do anything for both of them. They are there with a kind word or a smack. They tell you the truth and Osaki and Kofi take it because they know it is for the best. These friendships aren’t perfect—nothing is ever perfect. They have rips and tears and people lose their tempers but at the end of the day, their friendship is stronger for it. 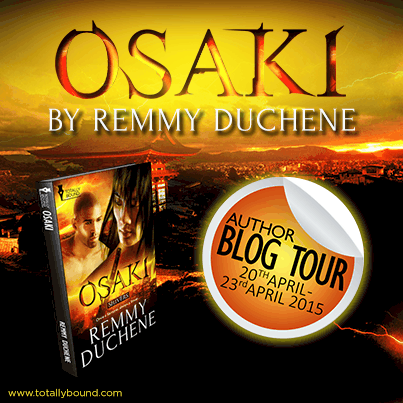 “What troubles you, my friend?” Aries asked as the two of them wandered through the great hall and out into the Celestial Garden. Osaki folded his arms behind his back and shrugged.

“I am not sure,” he replied. “I suddenly feel restless and alone.”

“But you are not alone, Osaki.”

“My apologies. I think I used the wrong word…lonely. I am amongst the stars—amongst all these beings, yet…”

“I understand completely. Why are you here? Everyone is somewhere else.”

Osaki thought about the answer to that before stopping to face Ares. “Yes, but everyone else has plans. Hercules has a date. Ciro has his husband. Sisqo has gone to spend time with Triton and their father—I could go on but I am fairly certain you get the picture.”

“I just finished training with Ciro. It did not go well.”

“The Shivers are a special breed, my friend,” Ares explained. “You cannot merely grasp what they are capable of.”

Ares held Osaki’s shoulder. “And he is right. Look, you may live the rest of eternity and still not grasp the powers of the Shivers. And you don’t have to. You have all of us here. We have your back.”

Osaki smiled. He wasn’t reassured but he didn’t want to keep dwelling on it. The two walked silently for a moment before a voice screamed through Osaki’s mind. He grabbed his head, and winced. “Shit, that’s loud.”

Osaki smiled at Aries through the pain while rubbing his temples and nodded. “I can hear when he calls me—when he thinks about me. Mind you, I don’t know what he’s thinking.”

“You may wish to speak with Ciro about this.”

Osaki was confused. “I am not ill, Ares. It’s just a voice. Ciro told me to expect it.”

“You don’t understand what this is, do you? Osaki, speak with Ciro.”

Multi-published Remmy Duchene was born in St. Anns, Jamaica and moved to Canada at a young age. When not working or writing, Remmy loves dabbling in photography, travelling and spending time with friends and family.

Enter Totally Bound’s April blog tour competition for the chance to win any eBook of your choice, not including boxsets or anthologies.