In Outcast Cowboys, two men with skeletons in their closet have to decide if they can cast their fears aside and trust one another.  Keep reading for an inside look at the characters, an excerpt and a chance to win a free ebook from Pride Publishing! 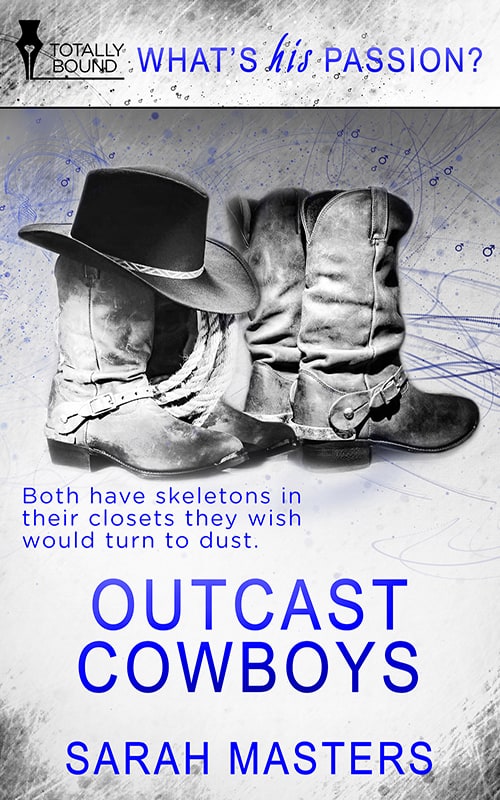 You can run but you can’t hide. Problems have a habit of following you, even if it’s only inside your head.

Ross decides to start a new life away from the grim belly of London, England, unable to stomach being a cop any longer. He tells himself he’s moving miles away to find himself a bed partner, but he’s lying. He has to. Facing up to the real reason he’s leaving isn’t something he can handle. His last undercover job proved too much—his life was at risk—and if he stays in London he’ll likely end up dead. Nightmares plague him, his subconscious unable to switch the past off. So he moves to a ranch in America, thinking the new surroundings and different lifestyle will help him to heal—and to forget. What he soon realizes is he’s jumping from the frying pan into the fire…

Joe’s passion—that of caring for the horses—is the only thing that keeps him sane. He’s a surly man, and for good reason—a reason he hasn’t told a soul. Folks think he’s mean and unapproachable and suspect him of committing murder. More than once. Locals assume that Joe got let off the hook. Nothing could be further from the truth, but Joe lets people think what they will. He’s done with their speculation and sly looks.

When Ross and Joe meet, tension is rife. The air between them prickles with animosity as well as sexual tension. Both have a past they can’t get over. Both have skeletons in their closets they wish would turn to dust. And both have to make a decision. Can they cast their fears aside and trust each other, or have the terrors they’ve experienced ruined them for love?

Reader Advisory: This book contains a scene of remembered non-consensual sex in a character’s past.

More About Ross: A New Kid on the Block

Sometimes, meeting new people can be daunting as hell, right? We’re reduced to feeling like children again, all squirmy inside, those damned butterflies wreaking havoc. Talk about asking yourself what you’re going to say and whether you’ll look a moron, eh? For Ross in Outcast Cowboys, meeting new people isn’t anything to write home about. He’s done it countless times before in London, UK, as an undercover police officer. The thing is, though, Ross has always played a part and never really been himself. When he moves to a ranch in Texas, USA, he wants to be himself—desperately—and discovers that meeting new people is a bit of an ordeal.

He chose to move there to run from his past, so what he encounters along the way he should expect. You know, fitting in with the workers, making friends—or enemies—and beginning a new career tending to horses, something he hasn’t got any experience with. He’s loved the idea of working with horses since he was a child, but to actually be doing it and pretending he knows what he’s doing…that’s another ballgame altogether. Yet he’s not one to shirk a challenge, especially one he’s set himself, and he gets on with it, hiding his feelings inside. Straight away, upon meeting Grenadier, the ranch owner, and two of the workers, Joe and Limmy, Ross realizes that there are things hidden at the ranch, events and the consequences of them, and his police training kicks in. He has to remind himself he isn’t a cop anymore and should mind his own business—but that doesn’t come easy. 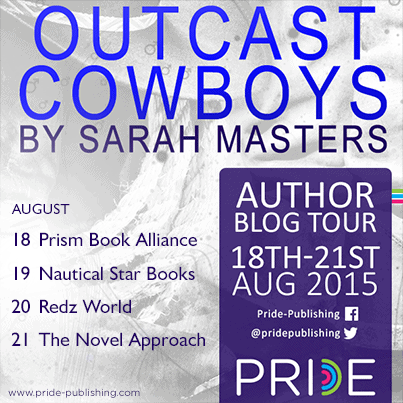 Grenadier was one hell of a size. Not an ounce of fat on him, he filled the space, his arms straining against the rolled-up sleeves of his burgundy checked shirt. His skin was as well-worn as the fence back there, creases around his eyes and either side of his mouth, but he looked about forty, those wrinkles not matching the age. Maybe the sun did that, dried out the skin and matured a person. Curly black hair peeked from beneath his hat, and dark brows arched over eyes so blue they matched the sky.

Ross cleared his throat and stared through the windscreen.

You can do this. You’ve played many roles before. This one’s no different.

The interior of the truck buzzed with something, some force or other that Ross couldn’t define. It was as weird as everything else around here, alien, forcing him to realize he didn’t have a clue as to what he’d let himself in for. Yeah, he’d thought he’d be okay taking on a job he’d be trained for as he went along. And people moved to different countries all the time. But the culture shock, coupled with the feelings of being so out of his depth…

Shit, I’ve made a mistake.

Ross assumed he was talking about the ranch. How could Ross be honest without causing offense? He was used to skyscrapers that kissed the murky heavens and buildings so close that at times he could reach out of a window and touch the hand of someone else doing the same thing from next door. This…this emptiness, the space, that weird buzzing crap… He didn’t think he’d ever get used to that.

So why did I come here? Why didn’t I choose a city?

He knew damn well why.

“It’s certainly in the arse end of nowhere,” Ross said. “Like you told me. Bumfuck Egypt or something, you said. And I saw the pictures but didn’t really appreciate how empty it was until now.” He squirmed inside, aware that Grenadier was staring at him. “But yeah, it’s nice.” A shitty, lame word to describe someone’s pride and joy, but that was all he had. Nice.

Grenadier drove toward the ranch. Ross looked out of the side window, noting how the horses weren’t bothered by the truck. They continued to graze, one or two raising their heads to stare. The house came closer, grew bigger, and he spied a wraparound porch where a couple of men sat on rockers in the shade having a beer. Ross’ mouth watered. He swallowed and wet his parched throat. He had to get this damn coat off, feel less like he was sitting in a sauna.

After parking up, Grenadier got out. He walked round to Ross’ side then hauled out the suitcase and took possession of it, striding to the porch with an exaggerated swagger while Ross scrabbled to join him. His holdall bumped his body with every step, and he concentrated on the steady beat of that instead of the ones pounding in his chest and throat. Head down but with his eyes lifted, Ross watched the expressions on the faces of the two beer-drinking men to gauge their reaction to some English bloke joining their ranks. One of them laughed—a dark-haired fella who slapped his thigh. The other, a blond, stared—hard—bringing on all kinds of uncomfortable feelings.

The newcomer. Again. It didn’t sit well this time either. He’d been the new kid on so many occasions before it shouldn’t have bothered him. Those times, though, he’d been safe in the knowledge that other people had his back—even though those people didn’t really want to have it.

On the porch, Grenadier said, “Joe, Limmy, this is Ross Jones.”

Ross winced at his common-as-fuck British name. He nodded as the men stood, then shook their hands. “Nice to meet you.”

There it was again. Nice.

It wasn’t—wasn’t sodding nice at all—but he could hardly say that. The urge to walk back down that drive and wait for another bus going the way he’d come was strong. He wiped his brow with his arm then undid his coat, lightheaded from being so hot.

“Ready to get your hands dirty?” Joe asked.

His short hair was so light blond it bordered on white, bringing old men to mind. A speckle of darker stubble covered his rigid, square jaw, and it looked sharp, like it would dig into skin when he kissed someone. A scar ran from his eye to one corner of his mouth, jagged, as if an assailant had changed direction when slashing his face.

What, get my hands dirty now?

“I’m ready to work the day after tomorrow, like I agreed with Grenadier,” Ross said, wanting to make sure they didn’t expect him to start early. Not after that flight and the seemingly endless bus journey. Plus there was the jet lag to come. He was tired, bloody bone weary, and just wanted to go to his room. And with it being early evening, he hoped work had already ended for the day anyway.

“Good.” Joe sat again, holding his beer bottle loosely at the neck. His fingers were thick, blunt-ended, and his nails were surprisingly well maintained. “Because we got ourselves a bunkhouse to finish.”

Ross looked to Grenadier for answers.

“Yeah,” Grenadier said. “I started tearing down the old one just after you applied. Damn thing was falling apart anyway. I’d hoped to get the new one ready for when you arrived but…” He shrugged. “Shit happened.” 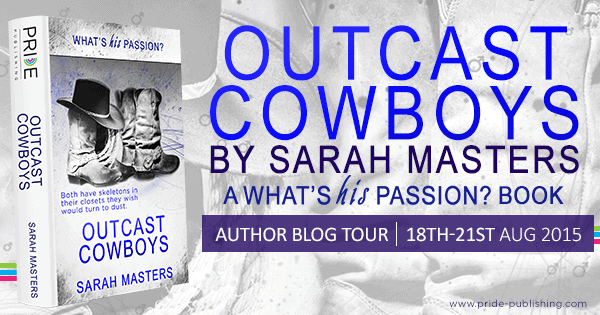 Like the sound of Outcast Cowboys? Buy it here.

Sarah Masters is a multi-published author in three pen names writing several genres. She lives with her husband, youngest daughter, and a cat in England. She writes at weekends and is a cover artist/head of art in her day job. In another life she was an editor. Her other pen names are Natalie Dae and Geraldine O’Hara.

Enter Pride Publishing’s August blog tour competition for the chance to win an eBook of your choice (not including boxsets or anthologies).