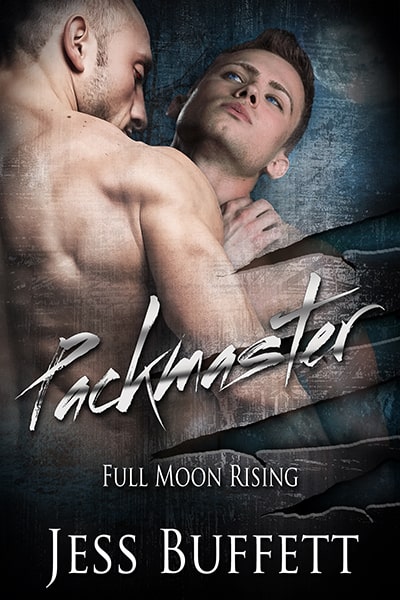 Kyan had never known true kindness, or what it felt like to be completely entranced by one person…until he met Blaise. When his life spins out of control, and a whole new world is opened up to him, he finds that the only human being he can turn to, may not even be human at all.

Blaise has spent months trying to figure out the best way to approach his shy and nervous mate. As the Packmaster in the small town of Rowan Oak, he isn’t used to having to show restraint or patience. When he finally makes his move a turn of events involving a forgotten note, a disappearing mate, and trouble with a group of hunters leads to disastrous results.

When Blaise finally catches up to Kyan, what he finds and the answers he gets are nothing like what he had been expecting. Will the pair be able to straighten out their misunderstandings and find the happiness they both long for, or will the Packmaster lose the only thing he has ever had to fight for?

In Packmaster, Kyan works at a small, local diner.  Blaise has been coming in every morning for breakfast and finally gets the nerve up to ask Kyan for a date.  We meet the two characters on ‘the morning after’ where Kyan wakes up happy but soon discovers Blaise has gone missing.  Without giving away too much of the story, lets just say there is a bit of a misunderstanding, some serious confusion with self identity, a whole lot of action and a tentatively happy ending.

This is the first mpreg book I have written.  I understand some people don’t care for it but honestly, it was well written and I found it to be a unique addition to the story.  I will say that this is a short novella so it was a little disappointing how much was left OUT of the book.  I really wish I had gotten a better glimpse of Kyan’s life before he found Blaise again.  And the ending I thought was too abrupt.  I understand that there is supposed to be another installment after this one but I’m not sure the ending came at a very good time.

I loved Blaise’s character.  All fierce protector one minute and tender lover the next.  Kyan was confused throughout most of this story but was relatively happy to just let Blaise lead the way.  I loved his protective instinct and think his character was a good match for Blaise.

Kyan and Blaise had a sweet yet sexy relationship and I am curious to see how things work out for them.  I would have liked to see a bit more detail at both the beginning and end of the book but overall it was a good read.

Kyan ran. His legs burned, his chest was tight and the fear that clogged his throat was so completely overwhelming that he just knew at any minute his entire body would give out on him. The heavy rain pelted down hard, and his small stature, with hardly any muscle or bulk of any form, quivered from the strain. He pushed himself through the pain, refusing to give up. The abhorrent idea of allowing the monsters that chased him, to catch up, was the only thing that kept him moving. That, and the small flutter he felt in his stomach. The reminder that he was not only running for his own life, but that of his unborn child’s. Even now, with the small protrusion in his lower abdomen, the thought almost sent him careening off course.

Pregnant! How could a man be pregnant? It just shouldn’t be possible.
Kyan swiped his auburn hair out of his face, so that he could see better. The normally spiky locks hung plastered to his forehead by sweat and rain.

“There he is. Get him!” One of the many voices that had taunted him for the last hour, shouted.
Alarm shot through him when he realized just how close they had gotten to him. A whimper broke free as he darted his way through the thick foliage and branches that stuck out and cut through his skin. He almost lost his footing over a protruding tree root, but luckily he was able to leap at the last moment, landing firmly on his two feet.
Just as he regained his stride, a heavy mass ploughed into his side, sending him careening to the ground. He barely had enough time to twist so as not to fall onto his stomach. His entire frame ached, and all he could do was curl up into a ball, protecting himself and his child as much as possible.

“Shhh,” came a vicious hiss from above him. Firm hands clamped down hard on him as he attempted to shrug them off. “Do you want them to find us? Keep still and be quiet.”

He froze at the menacing yet familiar voice, and only then became aware that at some stage he must have closed his eyes. Prying them open, Kyan stared at the hulking man above him in shock, confusion and not a little bit of fear.

A hand quickly covered his mouth as Blaise growled. “For the love of god, Kyan. Shut. Up.”

Jess Buffett was born and raised in New South Wales, Australia. She is a mum of two, married to her high school sweetheart.

Jess is a hopeless romantic who is a huge fan of M/M and M/F romance with a happy ending—anything with hunky men in all their glory, whether they be Shifters, Vampires, Cowboys, or the boy next door.

A caffeine addict who shamefully can’t make a decent cup of coffee to save her life, Jess believes in soul mates, happily ever afters, and in love at first sight, but that sometimes people need a second or a third for the brain to catch up.