In Part & Parcel by Abigail Roux, Nick and Kelly head out with the rest of the Sidewinder team on a mission for their fallen teammate and an emotional journey of discovery at the same time. I received one copy of this book at no charge in exchange for my honest reviews but all opinions expressed here are my own.  This post contains affiliate links. 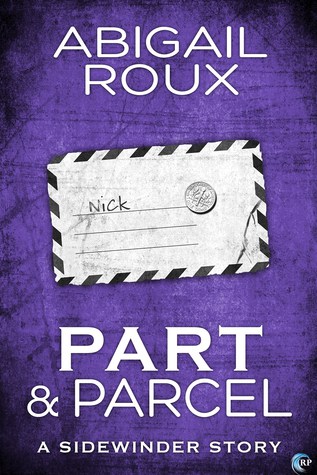 About the Author:  You can learn more about the author and the Cut and Run universe by checking out the authors tumbler page.

Nick O’Flaherty and Kelly Abbott had their happy ending in sight when a friend’s call for help almost ended with them losing it to the blade of a knife. Now, in the aftermath of near-disaster, both men are trying to heal and move on.

Moving on together, though, is harder than either of them realized it would be. Kelly struggles with simply being a lover instead of the Doc, while Nick is mired in his recovery. The distance between them inches along in stilted silence.

Desperately seeking solace, Nick finally gathers the courage to sort through the possessions his dear friend and fellow Sidewinder teammate Elias Sanchez left him when he died. Instead of comforting memories, Nick and Kelly find a stack of letters and strict instructions from Eli that prompt them to send out a call for assistance. With Eli’s letters in hand, Sidewinder sets out on one last mission together, seeking peace and absolution from beyond the grave—and from each other.

Let me just say from the start that I have read every book that Abigail Roux has written as part of both the Sidewinder series and the broader Cut & Run universe.  I have been a die hard fan from day one.  Yes, I like some books more than others but they are all in my ‘read over and over again’ pile.  Part & Parcel was just as much a hit for me as the others.  I liked some parts more than others but overall it was a fantastic book.  I will try to review without giving away too many spoilers but some details have to be provided so that is your warning to read with caution!

Part & Parcel by Abigail Roux starts out where Crash & Burn left off.  Nick is alive and barely out of the hospital.  He is weak, physically hurting and not 100% in control.  He hates it with a passion.  Kelly has transformed from ‘boyfriend’ to ‘doc’ and the romance and passion they found has been shoved aside.  It leaves them both a bit confused and struggling to find their way back to the very new relationship they had a few months ago.

During Nick’s recovery, he starts going through the box of things that Eli Sanchez’s mom gave him at his funeral.  Turns out, Eli has a mission for Sidewinder.  Not to solve a crime or save the world but to reconnect the boys.  He could see (even oh so long ago) that the guys were splintered apart.  They needed reminding about who they were, both as individuals and as a team.  His mission brings together the remaining 5 Sidewinder members and sends them on an emotional journey across the country.

There are a lot of twists and turns to the emotional upheaval that these guys need to deal with.  A few thoughts on things as I read:

Nick and Kelly’s issues seemed to be a bit forced.  Nick lied in the previous book about a few things.  He pretended to forget his marriage proposal. There is a sex tape that involves Nick with someone else.   I get where Kelly has issues but they just seemed to be a bit over the top and talked about over and over a few too many times.

Nick and Ty seemed to have mended fences.  I was thrilled to see these two rediscover their easy camaraderie and watch how easy they fell into their ‘puppy pile’ at bedtime.  They need each other and finally seem to have overcome their past issues.

I loved the letters from Eli.  He knew these guys backwards and forwards and got each one of them thinking about things in a way that shed a light on not only their personal problems but the way the team functioned.  There is a bit of ghostly haunting…nothing over the top but you know he is keeping an eye on the guys as they work through their mission.  I wish there was a way to go back in time and change his fate.  He seems like too awesome a guy to die so young.

We see more of Owen and Digger:  I have been wanting to see more of these two and never do.  I feel like I barely know them at all, even though I have read every single Sidewinder story. There is (maybe?) a hint that Digger is going to get his own book?  Please?

I think Eli’s story should have started sooner:  I get that Nick had to recover and issues needed to be presented in a certain order but the first half of the book seemed to ramble a bit before the Eli mission kicked in.  I think the author should have gotten into the heart of the book a little earlier.

SO happy to see more Ty and Zane and the kitties! Part & Parcel is really about Nick and Kelly but you get a decent amount of Ty and Zane so I was happy!

I didn’t really need the Nick’s dad drama:  Issues came up and were revealed.  I think it just added more drama without doing anything to further the story.

There is some time hopping:  This isn’t really a positive or negative.  Dates were provided so you could keep things straight.  I liked seeing into the boy’s pasts.  But, it detracted a bit from the ‘forward moving’ of the story.  Pluses and minuses there.

So, overall….  Part & Parcel was an awesome story.  Loved parts, didn’t like other parts.  But, overall a seriously good book.  It is plenty sexy….some might say a bit too heavy on the sex but where these boys are concerned I just can’t say ‘no more sex, please’.  There is your typical Sidewinder humor and snark.  These guys know each other inside and out.  They live to torment each other in some amusing way or another.  The story has the same type of writing style as the others in the series.  Lots of back and forth bantering, lots of drama and angst and just all around great writing.

Make sure you read ALL the way to the end.  You get a nice little bonus Ty and Zane story that I hope leads into the next book somehow.