Thanks so much for stopping by today’s blog tour for Practice Makes Perfect by Jay Northcote.  This is book 3 in the Housemates series and a cute romance between one very geeky physics student and his much more studly neighbor.  As Dev and Ewan work through Dev’s to do list, they find themselves falling deeper into a relationship they never expected.  I received one copy of this book at no charge in exchange for my honest review.  Keep reading for the review and giveaway! 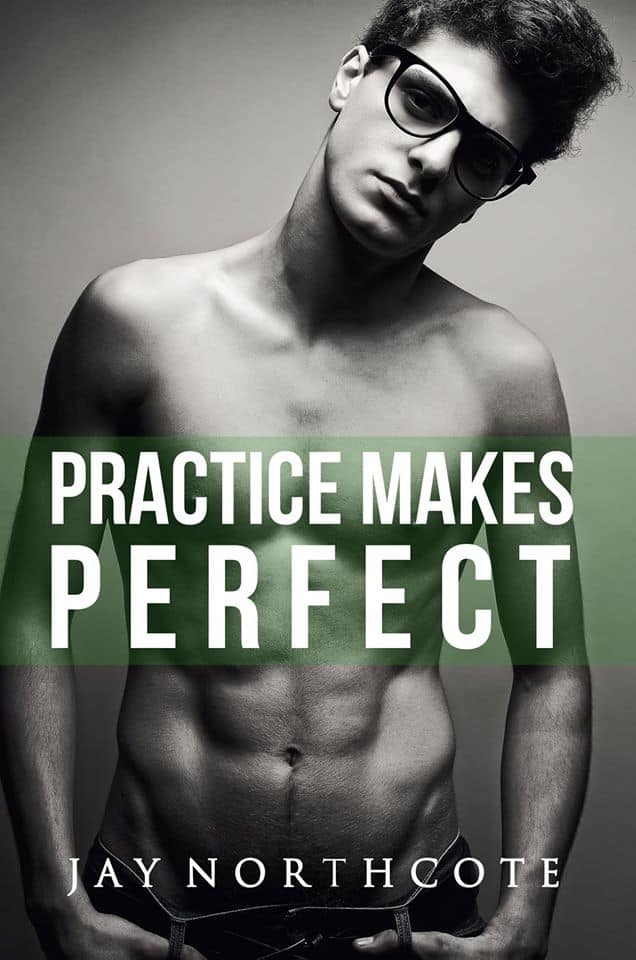 Dev, a geeky first-year physics student, has zero sexual experience and heís determined to change that ASAP. After a bad time in halls of residence, heís starting the summer term with different housemates and a new plan of action.

Ewan lives in the house next door to Dev. He ís young, free and single, and isn’t looking to change that anytime soon. When awkward circumstances throw them together, Ewan offers to help Dev out in the bedroom in return for maths tutoring, and Dev jumps at the chance.
They work their way through Dev’s sex-to- do list, but what starts as a perfect no- strings arrangement gets more complicated as their feelings for each other begin to grow. If theyíre going to turn their lessons in lovemaking into something more permanent, they need to work out how they feel about each other before they get to the end of Dev’s list.

NB: Although this book is part of a series, it is a complete story with different main characters and can be read as a standalone. 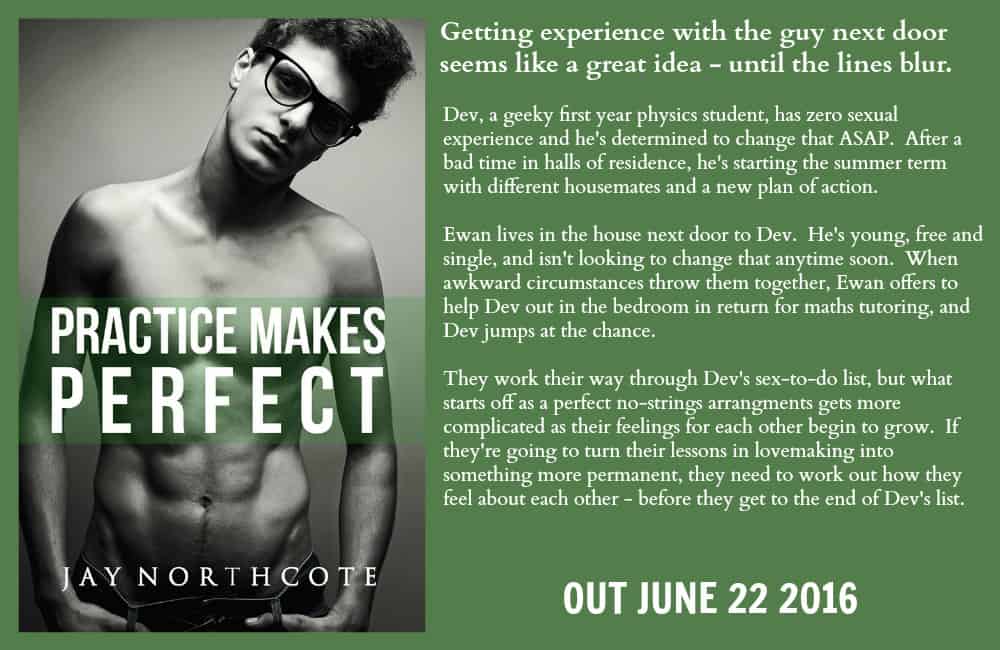 Practice Makes Perfect by Jay Northcote Excerpt
Sitting on his bed, Dev yawned, his full stomach making him sleepy. He stared at his phone as he contemplated calling home but decided he couldn’t face it tonight. He loved his mum, but she did tend to bang on. Once she got him on the line, she’d end up talking for ages and asking him a million questions he was too tired to answer. Instead, he sent his mum a quick text.
All moved in, everything ís good. I’m shattered now so I’m going to have an early night. I’ll call you tomorrow.
She replied within seconds as though she’d been waiting for him to call.
Okay sweetie, glad you’re settled. Sleep well xxx
He picked up his notepad and crossed off phone home. Texting counted. He also crossed off everything else on his list for today.
That was Saturday done. Dev set his notepad aside, opened his laptop, and pulled up his lists app. He liked his notepad for day-to- day organisation; it gave him a certain satisfaction to cross out the things he’d done and to get to the end of the day with all the tasks completed. But for longer-term planning, he kept his lists on his Mac, synced to his phone.
For the first time in six months, Dev could breathe again. Finally, he had a safe place where he could get back on track and look to the future. He began to type.
Things To Do This Term
Make some friends
Learn to cook
Research sex stuff
Join Grindr
Get some experience
Find a boyfriend
He stared at the words on the screen and sighed. That seemed like a lot of things to aim for. But it was good to have goals, right? Jez and Mac seemed really nice, so hopefully Dev was already on his way to achieving the first objective. And that bloke Ewan Ö..Dev’s mind conjured up the image of the flame-haired hunk who lived next door. Ewan had been friendly.
Maybe there was potential there too.

Practice Makes Perfect by Jay Northcote review: (4 star rating)
Practice Makes Perfect by Jay Northcote is book three of the Housemates series.  While it can be read as a standalone book, the characters from the first two books are part of the story and they each have their own lovely backstory so I recommend reading them all!
Dev is the epitome of geeky physics student.  He is an organized list maker with questionable social skills who excels in school.  He is determined to make this year at college a good one after a rocky start.  He is a bit hesitant with his roommates and neighbor but they all seem like great guys and he settles into things rather quickly. I really feel for this guy…he just seems to need some friends and his determination to get a bit of experience in bed is sort of cute.  He is an all-around nice guy who just needs to come out of his shell a bit.
Ewan seems to be quite the popular jock type without the cocky attitude.  Nice to look at while being friendly and supportive of Dev all at the same time.  He is struggling in one of his classes and needs a bit of tutoring.  Seems like a great deal when the ‘experience in bed in exchange for math tutoring’ idea comes up.  He is incredibly patient with Dev and is a super  sweet guy.
I really enjoyed this story and it is a nice, light read.  The characters were well developed, the storyline was cute and the writing was excellent, as it is in all of Jay Northcote’s books.  The attraction between these two is the perfect combination of sweet and sexy and I always enjoy a book where the sex is hot but doesn’t take up the entire plot line.  I was glad to see the characters from the previous stories in Practice Makes Perfect.  It was nice to see how they were getting along. Practice Makes Perfect by Jay Northcote is a low angst story that focuses on the developing relationship and the two men discovering that they truly enjoy being together, both in and out of the bedroom.
Author Bio:
Jay lives just outside Bristol in the West of England, with her husband, two children, and two cats.
She comes from a family of writers, but she always used to believe that the gene for fiction writing had passed her by. She spent years only ever writing emails, articles, or website content. One day, she decided to try and write a short story, just to see if she could, and found it rather addictive. She hasn’t stopped writing since.
www.jaynorthcote.com
Twitter
Facebook profile
Facebook Author Page
Newsletter
Jayís books 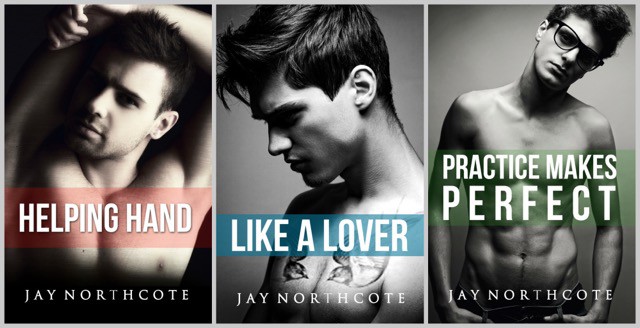