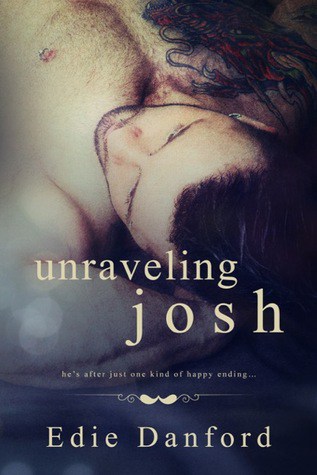 About the Author:  Learn more about Edie Danford by checking him out on Facebook or Goodreads.

Nick McQueen just scored the perfect hookup—Ellery College ski champion, Joshua Pahlke. What better way for Nick to prove his transformation from high school loser to sexy sinner? He’ll gift golden-boy Josh with the hottest, dirtiest sex of his life and then leave him begging for more.

But his definition of happiness is about to change…

Josh needs to blow off steam. He’s spent years pushing himself in academics and sports, but nagging injuries and career doubts have him craving a new challenge. Nick might be the key—he sure as hell turns Josh’s crank. Josh eagerly rises to the task of winning over moody-broody Nick. But when new love and old secrets change the rules of their game, “winning” takes on a whole new meaning.

When the story begins, Nick is a total player.  He was bullied in high school and has done a complete 180 and turned into a cocky player in college.  When he spots his high school crush, he decides it is the perfect time to add another notch to his bed post.  Josh went from sexy high school athlete to sexier college athlete and is now at the same college as Nick doing post graduate work.  Little does Nick know, however, how truly sweet and slightly insecure Josh really is.

Josh was always the all American boy.  He excelled at academics and sports but with an injury nagging at him, he is taking a break from sports and focusing on some post graduate work.  Nick doesn’t let on that they know each other and Josh has no memory of him since they were several years apart in high school.

What starts as a hookup turns into a relationship, even if Nick doesn’t want to call it that.  Feeling develop, truths are exposed, and both guys end up heart broken and hurt.  Nick, though, is determined to get Josh back and the resulting quest for the hand of his prince is just downright warm and fuzzy.

What I loved more than anything in this story was watching Nick transform from a bit of a party boy slut to devoted and head over heals boyfriend.  It wasn’t sudden….it took time and the feelings just snuck up on him but they were real and powerful.

Edie Danford did a great job with both of these characters but Nick just really grabbed me from the beginning.  You think he is some academic and sports God and should have the ego to go with it but he was so damn sweet.  That hint of insecurity just tugged at my heart.

You get dual POVs in the story which I really appreciate. You really get into the heads of each of these guys and learn what makes them tick.  Nick’s past really helped form his outlook on exposing his heart and little flashes back to high school just hit the point home.  You will get glimpses into Josh’s past as well, giving you a clue as to why he is so insecure despite his accomplishments.

The chemistry between these guys is amazing but it is such a perfect balance between hot and dirty passion and sweet and tender love making.  The are just so perfect together!

Unraveling Josh by Edie Danford is beautifully written with the perfect balance of angst, romance and light hearted humor.  I didn’t want it to end but seeing these two guys get their happily ever after just made my heart happy!