Running with Scissors by L.A. Witt is a rock and roll, angst filled romance.  It’s not often that a guy gets a second chance at living his dream but falling in love may ruin Jude’s shot at musical stardom.  I received a copy of this book at no charge through Net Galley in exchange for my honest review.  All opinions are my own.

Running with Scissors by L.A. Witt 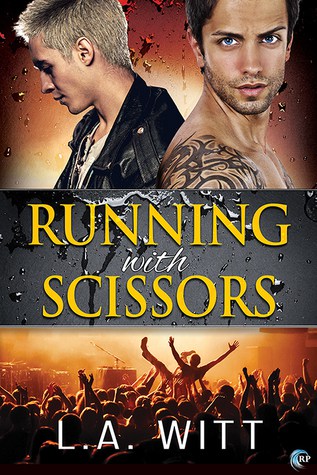 Running with Scissors Blurb: Eighteen months ago, drummer Jude Colburn made the biggest mistake of his life when he walked away from his band just as they were on the brink of success. Now, he’s got a second chance. The band’s bassist just quit, and Jude plays bass almost as well as he plays drums. The other band members aren’t thrilled, but they are desperate.

Running with Scissors needs him, but there’s one condition: no hooking up with bandmates. That’s what ruined things eighteen months ago, after all. Jude’s on board, but no one warned him about the drummer who replaced him. A.J. Palmer is shy and unassuming . . . until he hits the stage. He gets Jude’s attention from the first beat, and suddenly that “no hookups” rule isn’t so easy to follow.

Keeping secrets on a tour bus isn’t easy either, and it’s only a matter of time before the band catches on. When everything hits the fan, Jude has to choose: a second chance at the career he’s always regretted leaving, or a shot at the man of his dreams?

Running with Scissors is a rock band that is finally starting to make it big despite some early drama.  Jude was dating another band member and it ended with a messy breakup.  Jude flipped out a bit and left the band to suffer through the tedium of a desk job for 18 months.  In the meantime, Running with Scissors gets an album offer, goes on tour, and another band member walks out due to another messy breakup.  Now, the band needs Jude back but they are NOT happy about it.

AJ is an amazing drummer who was brought into Running with Scissors to replace Jude when he left them high and dry.  He isn’t as good a drummer as Jude was but he is now an official part of the band.  Jude is coming back as a bassist…NOT the drummer he originally was, although since he is a musical prodigy he can play just about anything. AJ feels a bit threatened but is drawn to Jude anyhow.  The other band members all hate Jude with a passion but need him to finish this next tour and the new album. There is anger, arguing and angst everywhere but very slowly and quietly, AJ and Jude are falling in love.  Considering the band’s history of bad romantic breakups, this is NOT a good thing.

So, the story and angst in Running with Scissors is a bit convoluted to explain in just a blurb but the author does a very good job at explaining the back story and interpersonal relationships between these men.  You can FEEL the anger projected towards Jude and while I totally understand WHY they were angry at him, the hostility got old after a while.  I just felt like yelling at all of them to grow up and stop acting like children, although I guess temperamental artistic and musical folks can be difficult to deal with.

I like how AJ and Jude’s relationship unfolded and they were clearly very attracted to each other but they are actually ‘together’ for only a small portion of the story.  They spend most of the book trying to stay away from each other to help ensure that there is no more romantic drama within the band.  There are 2 or 3 scenes of them finally giving into temptation and tossing each other around in bed. There are quiet smoke breaks where they talk and really seem to connect emotionally.  But, most of the story seems to revolve more around the band’s anger towards Jude and the rigor of living a musician’s life.  I am usually a die hard fan of L.A. Witt’s books but I really felt like I needed more romance in this one.

The writing itself in Running with Scissors is solid and the secondary characters are very well developed.  I am really curious about Richie, who is portrayed as ‘asexual’ and who doesn’t understand what all the fuss is about when it comes to relationships.  I think he has a very interesting story coming somewhere down the road!

Running with Scissors was a good story but it just didn’t grab me like some of the author’s previous books.  I loved Jude and AJ…the musical bond they seemed to have with one another, the sexual tension, and how determined they finally were at the end to make the band and relationship BOTH work.  I just wish they had gotten more time to actually develop their relationship as the story progressed.