In Sharing a Pond by Alex Whitehall Brent, a frog shifter, makes a long journey in the hopes of finding a happily ever after with his mates.   I received one copy of this book at no charge in exchange for my honest reviews but all opinions expressed here are my own.  This post contains affiliate links.

Sharing a Pond by Alex Whitehall 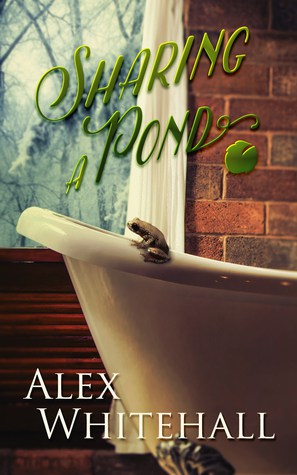 About the Author:  Learn more about Alex Whitehall by checking out the author’s website or following along on Twitter.

Brent shows up on Corey and Shane’s doorstep in the dead of winter needing a place to stay—and hopeful his mates will provide it, and not mind he’s a frog shifter. Being a shifter is nothing new to Corey and Shane, but neither is being mates. They’ve been together since before they first met Brent ten years ago—back when Brent was Brenda. Bringing a third into their relationships is more than a little complicated, but they’re willing to try. But change is always easier said than done, and Brent wonders if he ever really stood a chance at being happy with the men he has always loved and admired.

Brent has overcome quite a bit to find his mates.  Shifting from female to male overnight, abandonment by his family, an abusive relationship, and a long journey have slowed him down but he has finally made it to his mates.

Corey and Shane have been together for 10 years and are in a committed relationship.  When Brent shows up at their door they are a tad bit confused but willing to try and make things work.  Adding a third to their relationship will be challenging but they are committed to bringing Brent into their lives.

Without giving away too much of the plot, let me just say that this was a wonderful change from a lot of the shifter stories I have read.  Most shifters I read about are wolves or bears or some ‘alpha’ type species that is all MINE and TAKE and not alot of tenderness and thoughtfulness.  Corey and Shane were sweet to Brent and they found a nice balance in their interactions with him that was somewhere between friend, lover and guardian.

Brent was incredibly insecure about coming between Corey and Shane and being a burden. He has nothing when he shows up on their doorstep and accepting their help is tough on him emotionally. He wants to be an equal but is also afraid that he will end up coming between the two already mated guys he cares for so much.

I will say that I think the relationship was a tad bit imbalanced, which happens a lot with M/M/M pairings.  Corey and Shane seemed to be fine all by themselves.  Adding Brent into the mix seemed to throw things off a bit.  I felt bad for Brent that Corey and Shane were having sex without him around but he wasn’t allowed to be with either of them without the other present.  Seemed a bit unfair.

I enjoyed their time spent in shifter form.  There was something incredibly peaceful about a tiny frog sitting in the sink.  And Shane’s reaction to the frog mating call was cute.

Overall, this was a nice read with just the right amount of heat and angst to move the story along.  I think the relationship was a tad bit unbalanced but that was probably expected a bit with how young Brent was and his newness to the relationship.  I enjoyed the book and will be looking for more frog shifter stories!