In Shutdown Pair by V.L. Locey, Heath (aspiring writer and amateur hockey player) suspects their new goalie is harboring a secret. A little mystery, a little loving, and a whole lot of hockey.   I received one copy of this book at no charge in exchange for my honest reviews but all opinions expressed here are my own.  This post contains affiliate links. 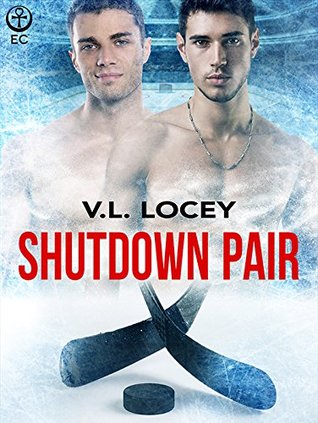 Learn more about V.L. Locey by checking out the author’s links below.

Slinging burgers in Minnesota in the dead of winter isn’t exactly the Hemingway lifestyle aspiring writer Heath has dreamed of. About the only thing the quick-witted wordsmith has going for him is his pick-up hockey league games every Saturday. Now it looks like even that’s gone south, along with the team’s AWOL goalie.

That is until mysterious Wyatt Dickenson skates into town and announces that he can tend net. Heath isn’t the type to turn down such a generous offer from a Greek god with impressive equipment and all the right moves.

Heath offers to share his rented room with the enigmatic drifter, and soon begins to suspect that Wyatt is harboring a secret. Can Heath get Wyatt to open up about his dark past? Is there a dark past? Or is Heath’s writer’s mind just spinning sexy, shadowy scenarios about the mystery man who has him so infatuated?

In Shutdown Pair by V.L. Locey you have Heath, burger flipper by day and aspiring writer by night, who loves his amateur hockey league and time playing video games.  A mysterious man shows up on the ice just in time to fill in for the team’s missing goalie.  The mysterious man is quiet, sexy and clearly on the run from a past he is terrified of.

Wyatt just wants to make it over the boarder to Canada and escape a troubled past.  He needs to wait for the weather to improve and earn some money so middle of nowhere Minnesota is where he ends up.  Unfortunately, his past catches up to him and he isn’t sure he wants to run again.

I honestly didn’t like Heath all that much at first.  He is a bit of a jerk….slightly judgmental and borderline rude.  His attitude definitely improves as you move through the story and he turns out to be a really sweet guy.  He really digs deep to get to know Wyatt and show him the support and caring that will help him open up.  Of course, the fact that he wants to climb Wyatt like a tree is a good reason to cozy up to him but he is genuinely a nice guy and wants to help.

Wyatt’s character just tugged at my heart.  He is so big and tough but also afraid and vulnerable.  He is desperate, slow to trust anyone, and keeps his problems to himself until they show up on his doorstep.  I love that combination of tough on the outside but tender on the inside!

You meet a few secondary characters in the story but they don’t play major roles.  They are a very well written and creative supporting cast but Heath and Wyatt definitely take center stage.  They dance around each other physically and emotionally for most of the story and it isn’t until about three quarters of the way through the story that they really let their guard down and get involved.

I LOVE a good hockey story and while the others I have read by this author have mostly been professional or minor league hockey, this one revolves around amateur ‘beer league’ hockey. Mainly just for fun but slightly more organized.  I might have liked to see a bit more hockey in it but the parts that were included were definitely well written.

Shutdown Pair by V.L. Locey is written in Health’s point of view and I did want to get more into Wyatt’s head as the story progressed.  I enjoyed the writing style which was very engaging and kept the story moving forward quickly.

Overall I may have liked the story to be a little bit longer…a bit more dealing with Wyatt’s past and a bit more falling in love.  However, this was a very well written story and one that I definitely enjoyed!

Try this one too!

Read my review of Full Strength by V.L. Locey 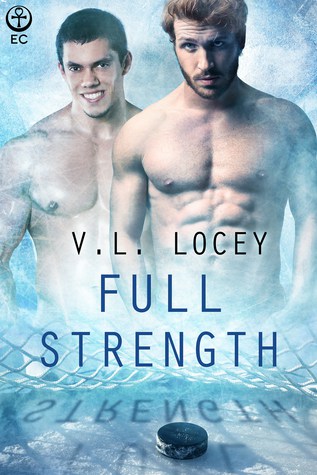