Spaghetti Western by EM Lynley is a contemporary M/M romance that is part of the Delectable Series.  Perfect for fans of both romance and food, it had well developed characters, a bit of angst and just the right amount of heat! 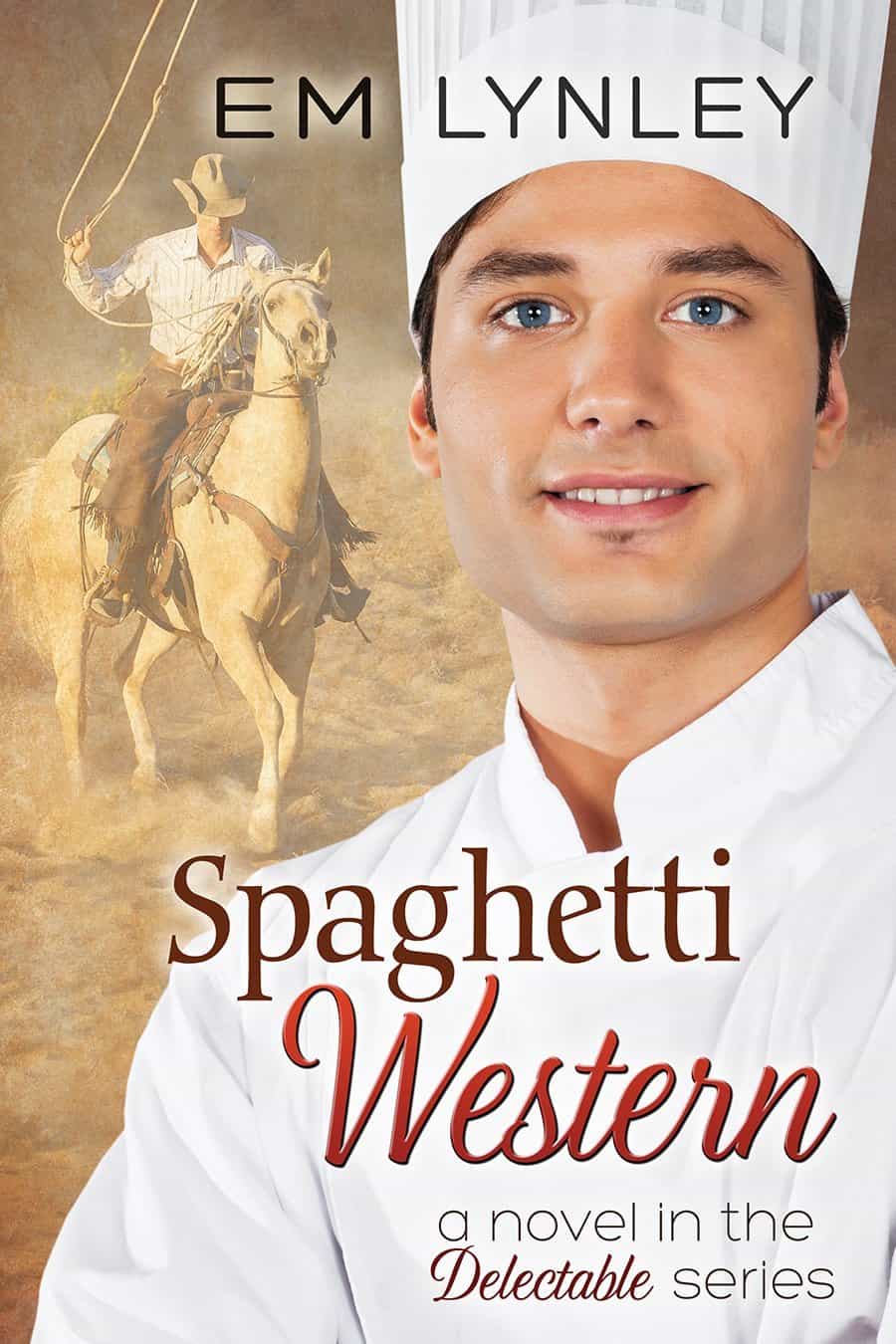 Cordon Bleu-trained chef Riley Emerson arrives in Aspen, Colorado for a summer at the best restaurant in town, only to discover his jerk of a boyfriend has dumped him, leaving his heart and his plans in tatters. Doubting himself and longing for a change of pace, he takes a low-paying position at the Rocking Z guest ranch, though he expects nature up close and personal won’t hold a candle to his exciting Paris lifestyle.

But all’s not well at the Rocking Z. Unsurmountable financial problems force them to seek a cash infusion from outside investor Fitz Wellington. Fitz is hot for Colby, and he won’t sign on the dotted line without some very personal incentives. The future of the ranch is at stake, and Colby’s just that desperate, but saving the Z might mean losing Riley.

While Spaghetti Western by EM Lynley is part of a series, I had no trouble reading this as a stand alone book.  It is the first in the series that I have read and the first by this author.

As a serious foodie I was drawn to Spaghetti Western just because the plot revolved so heavily around food but I found that the characters and plot drew me in right away!  Riley Emerson comes from a rich and privileged background but despises it and all the the world represents.  Much to his father’s disappointment, he heads to Paris to train as a chef at Le Cordon Blue culinary school.  After completely his courses, he heads back to the US to reunite with his boyfriend after a brief time apart.  While Riley was studying hard and missing his boyfriend, however, Denny was finding a few pleasurable ways to spend his time and didn’t count on Riley’s early return.

After walking in on Denny and his new love interest in a compromising position, Riley isn’t sure what to do with himself.  The job he had lined up in Aspen doesn’t sound so appealing since he would have to work with his cheating ex. Blowing off steam at a local gay bar puts him in a compromising position but thankfully an honorable cowboy comes to his rescue.  Riley is glad that cowboy wasn’t TOO honorable the next morning and after a passionate fling they head their separate ways.

Taking a tip from a local, Riley applies to work as a cook for one of the local guest ranches.  While definitely overqualified for the job, he needs to heal and the fresh Aspen air is the perfect place to do it.  Imagine his surprise when he realizes that his hot and sexy cowboy helps run the guest ranch who’s kitchen he now runs!

Colby Zane doesn’t play honorable cowboy very often but he finds he can’t stop thinking about his run in at his local gay bar.  Finding out that his one night stand is now his new ranch cook throws him for a loop! Financial issues and the stress of running a working cattle ranch and ‘guest ranch’ makes a relationship the last thing on Colby’s mind but he can’t help falling for Riley. Unfortunately, outside forces may push them apart before their fledgling relationship can take off.

Colby is dedicated to his ranch, hard working, and blames himself for the financial issues the family is having.  He is a little bit insecure when it comes to trusting his judgement so he is hesitant to fully trust and place his faith in Riley.  After the debacle with Denney, Riley is sure that he never wants to get involved in another relationship but his feelings for Colby are getting intense.  Their relationship is tenuous at best when a possible investor, B. F. Wellington arrives and starts creating havoc between them.  Neither of them are sure of how far Colby will go to save his ranch.

I loved the depth of the characters in Spaghetti Western and the fact that each of them were slightly flawed.  They needed to learn how to open up and communicate with each other, but that is not generally a trait found in a lot of guys!  There was just the right amount of angst in Spaghetti Western and other than the sexy one night stand in the beginning of the book, the characters really didn’t rush into the physical aspect of the relationship.

I honestly loved Spaghetti Western and have already bought another book in this series that I am eager to start reading!  And let me just say that the section at the end of the book with the recipes was MUCH appreciated by this avid foodie!