Thanks so much for stopping by today’s blog tour stop featuring Star Power by Morticia Knight.  In this romantic thriller, Adrien and Harry must escape a dangerous stalker before they can think about a happily ever after.  Keep reading for an excerpt from the book and enter the giveaway at the bottom of the page! 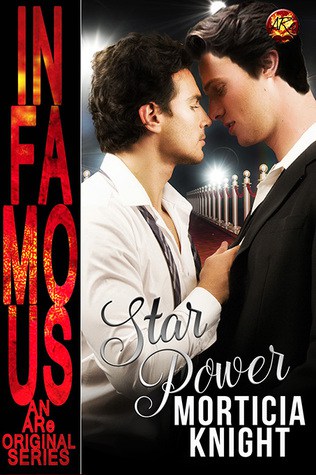 They must escape danger before they can have their Hollywood ending.

After a few cinematic bombs lower his box-office appeal, actor Adrien Fury wants Harrison Langford to bring his career back to superstar status. He would also love to learn more about his mysterious and handsome agent, if he could ever get him alone.

Harry has loved Adrien for years but never revealed his feelings. He keeps things professional between them and will do whatever it takes to make sure Adrien gets what he wants. When increasingly disturbing letters show up at his agency, threatening horrible things against the man he loves, Harry vows to protect Adrien at all costs.

Adrien and Harry are on the verge of revealing their true feelings to each other when danger strikes. Maybe they can share a lasting love…if Adrien’s stalker doesn’t get to him first.

The whole nightmare had begun a couple of months before, the first letters almost a month apart, then gradually becoming more violent and frequent. The one on Karen’s desk would be the third this week, the previous one less than twenty-four hours earlier.

“You can no longer be left alone for one thing.”

Adrien raised his head to see Harry staring at him even more intensely than normal. He hadn’t thought such a thing was possible.

“But I don’t trust anyone except my mom and sister. My brother’s out. He’d probably take out a billboard ad with directions to where I was and how to get to me. And anyway, I won’t endanger my family.”

“Of course not. After yesterday’s rather gory communication, I placed a call to a bodyguard agency. I’d planned on filling you in at the end of our meeting.”

Adrien tried not to roll his eyes. He didn’t know why they even bothered with meetings. Harry went ahead and did whatever he wanted to do anyway.

“Can I go on record and say that I think the whole bodyguard thing is creepy? Some stranger following me around in my own home, staring at me.”

“Is that less appealing to you than being killed?”

“Listen, Mr. Spock. Could I have a tiny bit of compassion here? You might not be freaking out, but I am.” He folded his hands in his lap, attempting to get his panic under control. Harry was right. Coming unglued wouldn’t help. He just had no idea what would. “Bodyguard, huh? How many and how do we pick a trustworthy agency? I mean, what if the stalker gets to them by paying them off or…something?”

“This isn’t the plot to your last bomb at the box office and regardless, I know of a reputable agency.”

Adrien let out an aggravated sigh. “Of course you do.”

“Would you prefer I was less efficient?” Harry continued as it had no doubt been a rhetorical question anyway. “I’ll confer with them. But my suggestion would be two inside and at least four on the perimeter of your property.”

Another sarcastic retort almost burst out of him, but he knew he was being a brat. It was obvious that Harry had already gone to the trouble of finding a way to protect him, probably doing it in a manner so that he wouldn’t get overly upset.

“Thank you. I’m just…” He swallowed hard past a lump in his throat.

“I know, Adrien. Trust me. I won’t let anything bad happen to you.”

Harrison gazed at the reflection staring back at him from his mirror. He adjusted the square shaped, solid gold and pearl studs in his royal blue Canali French cuffed dress shirt. His tie was in a pattern of diagonal stripes that consisted of the dark blue of his shirt, ice blue, then black. It was an excellent contrast to what he wore, the matching gold and pearl tie bar completing his ensemble.

He kept his dark brown hair meticulously trimmed and in a professional cut. The slightly longer strands across the top of his head were slicked back, only the barest hint of silver beginning at his temples. His exercise regime was basic, but kept him trim and healthy. His goal was a flat stomach, light muscle definition and enough strength that, on the occasions he sought out a partner, he’d have the vigor to effectively wield a crop or flogger and not experience any physical drain. It’d be a waste if he was too tired to fuck a man after reddening his flesh with an arousing beating.

Harrison banished his thoughts. The only man he’d ever loved wouldn’t likely appreciate his harsh attentions. He’d been aware for a while that Adrien found him attractive, had even picked up on his occasional attempts at flirting. But from the moment he’d sought out then signed Adrien, he’d protected his career, his reputation, and had done everything in his rather extensive power to give Adrien whatever he wanted. Jumping into bed with him would’ve been irresponsible.

Neither of them had love in their lives, but both were exceedingly rich and successful. Harrison didn’t mind loving Adrien from afar, not really. He wished for more, would give almost anything to have it, but the one thing he wouldn’t do was go against Adrien’s best interests. If keeping his hands off the stunning Adrien Fury was a part of that, then so be it.

He doesn’t have time for love or relationships.

In the beginning it’d made sense. Every resource had been needed to build a superstar career. Then the offers had come in and Adrien was so busy filming and doing promo tours, there’d been time for little else. Currently, all attention had to be placed on resurrecting the great Adrien Fury to his previously exalted status.

And keeping him safe.

Harrison sucked in a sharp breath, the pain that surged through him at the slightest thought that Adrien might be harmed being almost too much for him to bear.

No one will touch him. I’ll kill them first. 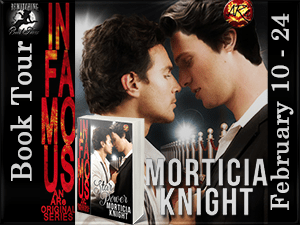 Morticia Knight spends most of her nights writing about men loving men forever after. If there happens to be some friendly bondage or floggings involved, she doesn’t begrudge her characters whatever their filthy little heart’s desire. Even though she’s been crafting her naughty tales for more years than she’d like to share – her adventures as a published author began in 2011. Once upon a time she was the lead singer in an indie rock band that toured the West Coast and charted on U.S. college radio. She currently resides on the northern Oregon coast and when she’s not fantasizing about hot men she takes walks along the ocean and annoys the local Karaoke bar patrons.

For more information on other books by Morticia, visit her website: www.MorticiaKnight.com

2 winners to receive two eBooks from Are books.