Sutphin Boulevard by Santino Hassell is a dark and gritty look at two men trying to survive their upbringing and falling in love along the way.  I received one copy of this book at no charge in exchange for my honest review.  All opinions are my own and this post contains affiliate links. 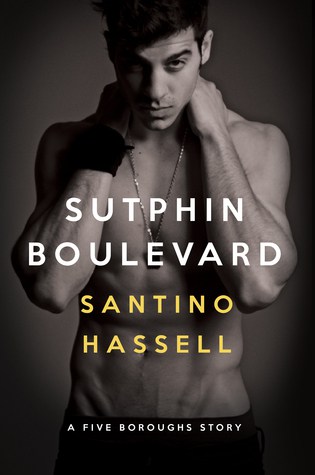 Michael Rodriguez and Nunzio Medici have been friends for two decades. From escaping their dysfunctional families in the working-class neighborhood of South Jamaica, Queens to teaching in one of the city’s most queer friendly schools in Brooklyn, the two men have shared everything. Or so they thought until a sweltering night of dancing leads to an unexpected encounter that forever changes their friendship.

Now, casual touches and lingering looks are packed with sexual tension, and Michael can’t forget the feel of his best friend’s hands on him. Once problems rear up at work and home, Michael finds himself seeking constant escape in the effortless intimacy and mind-blowing sex he has with Nunzio. But things don’t stay easy for long.

When Michael’s world begins to crumble in a sea of tragedy and complications, he knows he has to make a choice: find solace in a path of self-destruction or accept the love of the man who has been by his side for twenty years.

Normally when I finish reading a book I can whip out a book review pretty darn quick without thinking too hard about it.  Sutphin Boulevard by Santino Hassell was different.  This is a dark and gritty romance book with more sadness than happy and that threw me at first. I had to really step back and think long and hard about this book before writing the review.

Michael and Nunzio have been best friends for 20 years.  They grew up in a working class neighborhood in Queens in family situations that were pretty deplorable.  Nowadays, they both teach at a very queer friendly school in Brooklyn and spend just about every weekend drunk.  While they are both gay, they have never gotten together sexually until one night they engage in a very drunken threesome with a guy they pick up at a bar.  Now the lines are blurred and Michael is having trouble adapting.  He is struggling to deal with family issues and can’t quite cope with the stress of teaching either.  His stress relief comes in the form of drinking and turning to Nunzio for the comfort and stability he craves. It’s a vicious cycle that leads down a path Michael may not be able to survive.

Sutphin Boulevard is primarily Michael’s story and it honestly tore me apart.  His home life is horrible and he is weighed down by the responsibility of taking care of people who should be taking care of themselves.  You can literally SEE him destroying his life one choice at a time.

While you don’t get as much insight into Nunzio’s character you get enough to really feel how much he cares for Michael.  You can see that he feels more deeply for him than just ‘friends’ but is keeping it close to his chest.  While he is just as much of a partier as Michael is, he seems to have more balance in his life.

There are a lot of cultural family dynamics that comes into play in Sutphin Boulevard. Michael has made something of himself by going to college and getting a good job.  And it is now expected of him to be the responsible one of the family.  Even going so far as to supporting his mostly absent and alcoholic father and his deadbeat brother.  Although, I must admit…as the story progresses I begin to like Michael’s brother Raymond and hope he gets his own story soon.  The pressure on Michael’s shoulders is practically palpable.

While the stresses in Michael’s life are practically impossible to bear, his relationship with Nunzio keeps him from flying off the deep end completely.  The heat between them is intense but what is even more moving is the depth of emotion that runs between them.  I just wanted to yell at Michael to open his eyes and see what was right in front of him.

The only thing that really grated on me as I read Sutphin Boulevard  is that Michael and Nunzio acted more like 20 something frat boys than 30 something teachers with a college education.  They honestly spent half their week drunk and slept around quite a bit.  At one point, Nunzio is described as wearing black boots and chains while he is at school teaching.  It just didn’t quite sit well with me. Maybe there are teachers out there who spend half their time drunk and sleeping around but it really didn’t seem to fit in my head.

Overall, Sutphin Boulevard is a great book.  Gritty and emotional and not filled with a lot of fluff.  Michael and Nunzio get their happily ever after (sortof) however the ending did feel a little unfinished to me.  It was a difficult read for me…it was hard to watch Michael falling deeper and deeper into despair.  If you are looking for light and fluffy, Sutphin Boulevard isn’t the book for you.  However it is incredibly well written and very moving.