Today’s blog tour features Tangling with Bears by Lisa Oliver.  It is book 8 of the Cloverleah Pack series but can be read as a standalone book.  Tangling with Bears is a M/M/M shifter romance with a little bit of romance and a happily ever after ending.  It also contains a special kind of bear, his grumpy mate, and a wolf that just wants to be loved.  You can find out more about the story in the post below and then enter the giveaway at the bottom of the post.

Tangling with Bears by Lisa Oliver 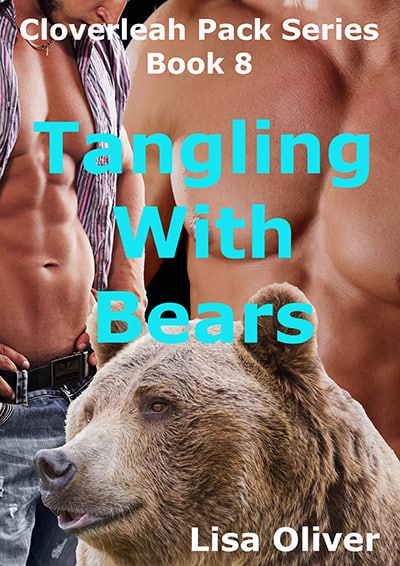 Can be read as a standalone

Tobias tells himself he’s having fun. He has a great life as a beta in the Cloverleah Pack, and while danger still threatens the pack, he has his friend’s wedding to look forward to, and the pleasures that come from hookups in random places. He’d like to meet his mate, just so he’s not the odd one out in the inner circle, but it’s not something he’s expecting anytime soon. So when a hookup just before the wedding leaves Tobias with a permanent scar, he wonders where the heck his life went wrong. Especially when the man responsible for the wicked set of tooth marks, disappeared after the deed was done, to ring a man called Kurt.

Kurt and Luke have been mated for three years. As bear shifters, Kurt has known from puberty that he will have two mates and once he’d claimed Luke, his mama warned him to be on the look out for a human female. So when Luke rings him and lets him know he might have accidentally on purpose bitten a wolf shifter, from some town they’d never heard of, Kurt heads to Cloverleah to sort out the mess.

Sorting out their mating is just one of the things the three men have to contend with. A magic user has stepped up his game and nowhere on pack lands seems safe. When Tobias gets taken, Kurt and Luke are helpless to do anything about it. It’s going to take the power of the pack before life will be safe again, for any of them.

Warning: Contains scenes of M/M and M/M/M sex. It also contains a special kind of bear, his grumpy mate, and a wolf that just wants to be loved. HEA and no cheating guaranteed.

While this book can be read as standalone, you will understand more about the secondary characters in the book, if you have read the others in the series. 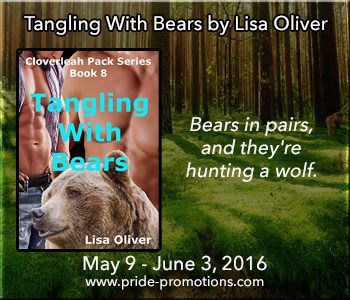 “I’m too sexy for my shirt…”  Kurt’s ring tone. Luke could hear the tinny tune, but it seemed like the sound was coming from outside. Leaping out of the truck, he glared at the trash can, now filled with his rubbish, before tipping the thing upside down, flailing his arms through the boxes and papers. There, on the ground. Thank the Fates. Luke sank his butt to the ground, tapping madly on the screen.

“Little bear, is everything okay? I sensed your distress. Are you hurt? Where are you?”

Luke breathed a sigh of relief, Kurt’s deep voice making the world seem like a more manageable place again. “I’m just outside of a tiny town, Cloverleah, I think it’s called. But Kurt, I found him, at least I think it was him, because I got hard, and he felt so good, and I just wanted to rub all over his sexy body, and when he came…”

Focus. Kurt was right. Luke knew he had a tendency to run on about things.

“I’m not angry, little bear,” and Luke could tell that he wasn’t. Kurt never got angry with him, even that time when he thought he could microwave an entire jar full of honey so it would soften, and forgot that the jar had a metal lid.

“Now start again, from the beginning. You met someone who made your cock hard?”

“And then what happened?”

“He was in the shower, here at the truck stop. He was fondling his pretty cock, and his body was slim but muscled and the water was just streaming down, and my cock was so hard I thought it would burst out of my pants, so I took them off, because it hurt, you know. And I don’t think he heard me, but I just had to grab him, and then…”

“Breathe little bear.” Yeah, that probably would be a good idea. Luke took in a deep breath and let it out slowly.

“That’s good, babe, now, I presume you got in the shower with him.”

“Yes, but I took my clothes off first.” Luke remembered that Kurt wouldn’t like the idea of him wandering around wearing wet clothes. He did tend to forget things like that sometimes, especially if the salmon were running.

“That’s good, so then what happened? You grabbed him. Did you frighten him?”

“No!” Luke stared at the phone, wishing Kurt could see his face. He never intentionally frightened anyone, except that one time, and that was the night Kurt came and saved him…

“Don’t let your mind wander.” Kurt knew him so well.

“I didn’t frighten him, he leaned on me, and he let me play with him, and his cock just fit in my hand, and he smelled so good, like honey and chocolate all melted together even with the bleach stink, and I couldn’t help myself, his ass was right there…”

“He let you have sex with him?”

“I didn’t want to do that without you there. I just rubbed on him lots, and with the water and the smell, and when his cock spurted out…”

“I get the picture, little bear and it’s all right.”

“So he must be our mate, right?” Kurt wasn’t upset with him, that was the main thing.

“You would’ve gotten sick, and you definitely wouldn’t get a hard on with anyone else but our mate – I’ve told you that before. So yes, the man is our mate. Unexpected, but there’s no other explanation.” Kurt sounded so confident and Luke sighed and smiled, even though he knew Kurt couldn’t see him. Kurt knew about so much, and he would make sure everything was okay.

“Where is the man now and what’s his name?”

Oops. “I don’t know what his name is,” Luke yelled as he leaped up, leaving the rubbish on the ground, and his truck unlocked. “I left him in the bathroom.” Shit, had he been too long, was the sexy man still there? Maybe the wolf had got upset with him. He pounded towards the bathroom and flung open the door, but of course the room was empty, nothing but a towel tossed on the floor to indicate the room had even been used. 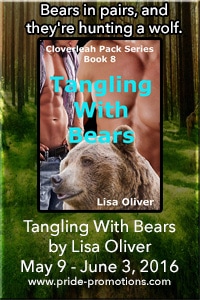 Lisa Oliver had been writing non-fiction books for years when visions of half dressed, buff men started invading her dreams.  Unable to resist the lure of her stories, Lisa decided to switch to fiction books, and now stories about her men clamor to get out from under her fingertips.

When Lisa is not writing, she is usually reading with a cup of tea always at hand. Her grown children and grandchildren sometimes try and pry her away from the computer and have found that the best way to do it, is to promise her chocolate.  Lisa will do anything for chocolate.

Lisa loves to hear from her readers and other writers.  You can friend her on Facebook (http://www.facebook.com/lisaoliverauthor), catch up on what’s happening at her blog (http://www.supernaturalsmut.com) or email her directly at yoursintuitively@gmail.com.

Today I’m very lucky to be interviewing Lisa Oliver, author of Tangling with Bears, book 8 in the Cloverleah Pack series.  Keep reading for a peak into the author’s background and more about Tangling With Bears.

Hi Lisa, thank you for agreeing to this interview. Tell us a little about yourself, your background, and your current book.

Hello and thank you for having me here today. As you know I’m an author, Tangling with Bears is my 20th book. I write paranormal romances, all M/M or M/M/M like this one, and they’re all based on the true mate trope, which is my favorite.

In this book we meet Luke, Tobias and Kurt. Tobias has been in the Cloverleah pack for a while, and has been having some fun while he hopes to find his mate. He doesn’t expect his bathroom encounter the day before Josh and Vadim’s wedding to turn into something a lot more. Feedback on Luke from my readers has everyone loving the gorgeous bear. Kurt is more of the strong silent type, but he finally gets his head screwed on in the end. This can be read as standalone, just like any of my other books.

M/M books give me the chance to explore a side of me that’s been ignored for most of my life. Through my characters I can explore the true meaning of strength, and how relationships develop along all different forms of communication.

A cup of tea – true. I had decided to do NaNoWriMo in 2013, and I had made a cup of tea. In the first line of the Reluctant Wolf which is book one in the Cloverleah Pack series, Kane goes looking for some lunch. My whole M/M writing career stemmed from there.

See above lol. Actually, that’s not true. I have been writing for more than twenty years and have a number of silly, short non-fiction books to my name on a whole range of diverse topics. But to me my writing career started with The Reluctant Wolf and I haven’t stopped since.

Which one, lol. The joys of having a number of series all going at the same time. Undesirable Mate, which is the 6th and final book in the Bound and Bonded series has just come out. Mace’s story in Stockton Wolves is a WIP as is a new Alpha and Omega book, Harder in Heels. Adair from the Cloverleah Pack is getting a bit demanding about me telling his story now he knows who his mate is, and I am also working on the sequel to Uncaged from Shifter’s Uprising, which is the series I write with my son.

I can clean the kitchen after my sons have been in there in twenty minutes flat – that is a pretty impressive talent if you could see the mess they make if they decide to cook me dinner. 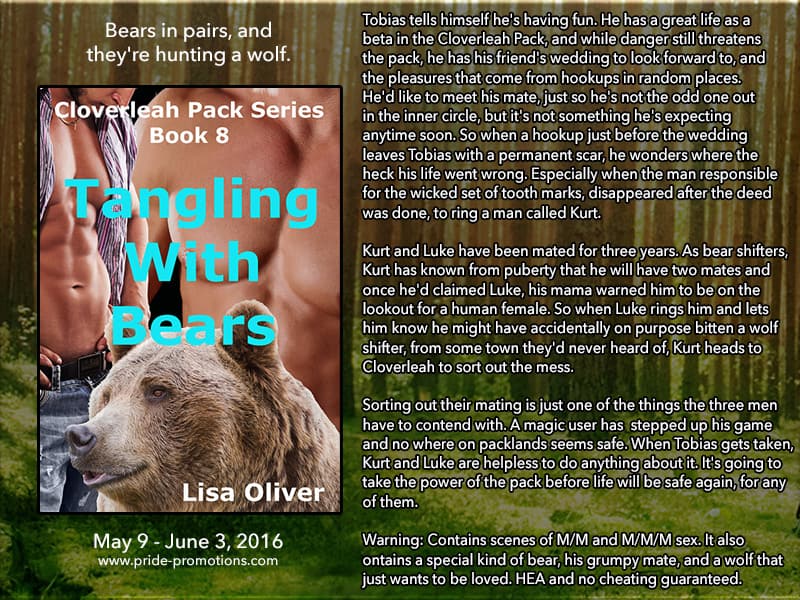 10-May: Wicked Faerie’s Tales and Reviews

24-May: Bonkers About Books