Today’s promo features a new fantasy romance from J. Scott Coatsworth called The Autumn Lands.  In this story, Jerrith has been kissed by an elf and can’t remain in his hometown of Althos anymore. Caspian doesn’t know exactly why he kissed Jerrith but now the two are running toward something together.  Keep reading for more about the book and an exclusive excerpt from the story.

This post contains affiliate links if you choose to buy the book and support the author and my blogging habit! 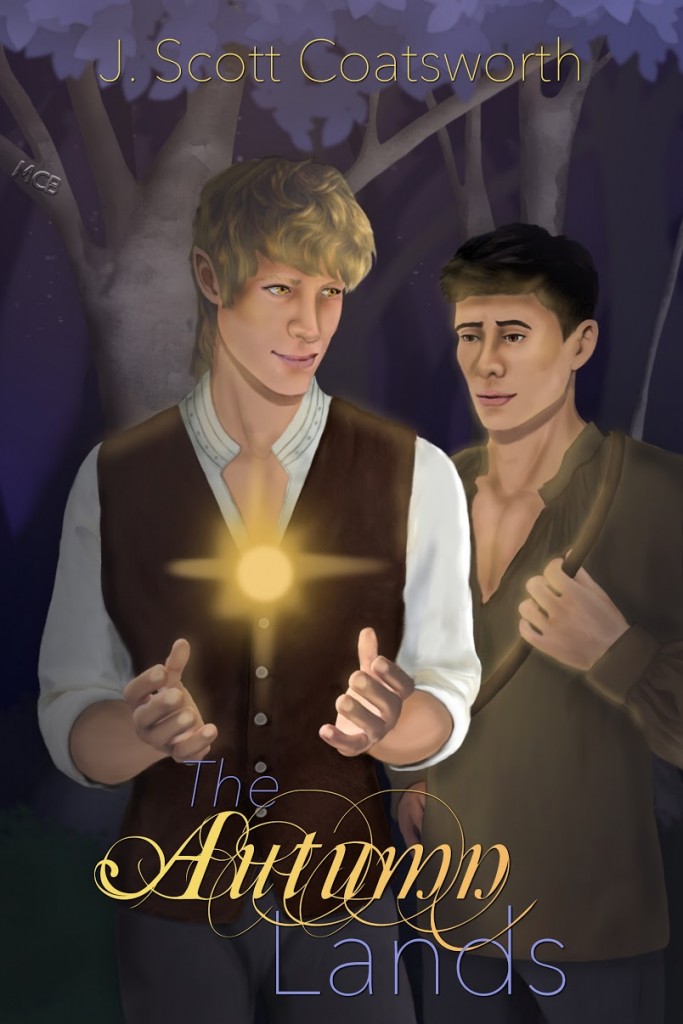 Jerrith is running. Kissed by an elf, he can’t remain in his hometown of Althos any more. Not that he wanted to stay.

Caspian still hasn’t figured out why he kissed Jerrith, but he’s running too. Since he was exiled from the Autumn Lands, his past has been hazy, and his future uncertain.

But when a stray memory brings things into focus, the two decide to run toward something together. What they uncover will change how they see the world, and themselves, forever.

Jerrith Ladner ran down Dyer’s Alley in Althos, winded but not daring to stop. He swung left down Chaplain’s Lane where the lanterns cast a crazy patchwork of light across cobbles, uneven enough to give even the Night Guard pause. His lungs hurt, but he didn’t slow down and didn’t dare glance back.

The occasional passerby stared at him as he flashed past, but he ignored them. Several times he stumbled and fell, and blood dripped down his bare leg from a skinned knee. The outskirts of town were silent, with almost everyone already indoors for the night.

His recent past was a blur, with snatches of it flitting by in his head like birds, flapping and confusing him with their unsteady rhythm:

The unexpected shock of it.

The glimpse of the Autumn Lands through the Nevris man’s golden eyes.

At last, exhausted, Jerrith ducked behind a low wall that ran along the fields just outside of town and looked back.

It was quiet. There was nothing but blackness crisscrossed by lamplight at even intervals.

Almost sobbing, he sat down with his back to the wall and curled up into himself, scarcely noticing the pain that traced the lines of his rib cage or even the bright line of red on his leg.

Ever so slowly, his heavy breathing eased and his jumbled mind began to sort things out.

He had been walking to the Smithy in the early morning when the Nevris caravan had passed him by, six wagons of merchandise from the Autumn Lands covered with heavy tarps, crossing through town on its way to the stables on the far side of the village. A stranger had drawn his attention—an outrider for the caravan.

Tall and slender where Jerrith was stocky and muscled, he was a young man, more or less Jerrith’s own age. His blond hair had been pulled back behind his pointed ears, the mark of the Nevris. He moved with a quiet and restrained grace.

His eyes were wide and golden, and they’d met his as Jerrith crossed the town square on the way to ‘prentice to the blacksmith. The man’s gaze had filled Jerrith with something hot and impulsive, a sense of anticipation. Something that he had no name for.

Then he’d been gone.

Jerrith had spent the long, dizzying hours of work in the Smithy, hammering out heated metal into a new plowshare for Farmer Angus, the hot breath of the bellows tempered only by the cool springtime air from outside. Trying to forget those eyes.

The heat of the oven only served to fuel the heat he felt inside, until he thought he might explode.

Sent home at last well after nightfall, he’d heard a whispered voice from the dark alleyway between the Alchemist’s shop and the Rutting Crow. Jerrith had looked around to see if anyone was watching, then slipped into the alley, his heart beating faster and the bulge in his pants stiffening.

The man had kissed him hard and rough, and he’d returned the kiss passionately as the Nevris man pulled him close.

Never in his eighteen years had he felt like that—the aching need of it that burned through him at the Nevris man’s touch. Jerrith had inhaled the masculinity of him, his male musk, and had found himself both aroused and frightened, riding the surge of animal hunger the kiss had unleashed.

Now his breathing came more slowly, more evenly, the chill night air cooling the sweat on his brow. He traced the remembered outline of the Nevris man in the air before him, feeling anew the surge of energy that had pulsed through him as they touched.

Something had awoken inside of him. Or maybe he had awoken. Whichever it was, his life before suddenly seemed dull, drab and unfocused.

His hand went unconsciously to the golden leaf that hung on a chain around his neck, hidden beneath his tunic, its delicate tracery a reminder of the mother who had given it to him just before she had died. Mamma, if you could see me now, what would you think?

His face flushed as he remembered again the sweet, long kiss, the crush of stubble against his cheek, and the exhilarating maleness of the other man’s caress. Then the abruptness of their parting, his shirt ripped off as Billy Hanson pulled them forcibly apart and hauled them out onto Vander Street.

Mayor Blackson had stared down at the two of them, a scattering of others gathered behind him in the dim light cast by the oil street lamps. “Jerrith, run home now. We’ll take care of this Nevris bastard.” He spat the word out like it was something vile and disgusting.

The other man—Jerrith didn’t even know his name—had been backed up against a lamppost, watching his captors warily. The mayor had turned to Jerrith, who was still standing there, and snarled, “Run home, boy, or you may take your share of the blame.”

Jerrith had gathered his torn shirt and fled, hearing the cries of the other man behind him and fearing he would be next.

Time passed now as the stars circled overhead and still he sat there, his mind almost blank. The wind blew through the fields, bringing the cool, loamy scent of the Red Hills up the valley. It slipped quietly across the road leading out of Althos, blowing stray leaves in short gusts down the cobblestone lane.

Jerrith’s breathing eased in and out of his chest now with a slow, steady rhythm.

The yellow moon rose over the tree line in the distance, casting her warm golden light across the town. It had to be close to midnight.

His father would be missing him, if the lout wasn’t already passed out drunk on the hay mattress on the rough floor of the tiny home they shared. He rubbed his cheek absently, his latest set of bruises almost healed. It hardly hurt at all.

Jerrith’s knee had stopped bleeding. He focused on the crust of dried blood, picking off the flakes at the edges. Ever so slowly, his awareness expanded to encompass the rest of the world around him—the wind, the moon, the silence of the night. As he took stock, a plan formed in his head. 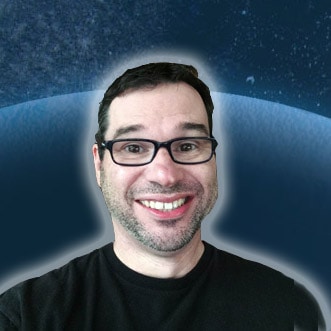 Scott has been writing since elementary school, when he and won a University of Arizona writing contest in 4th grade for his first sci fi story (with illustrations!). He finished his first novel in his mid twenties, but after seeing it rejected by ten publishers, he gave up on writing for a while.

Over the ensuing years, he came back to it periodically, but it never stuck. Then one day, he was complaining to Mark, his husband, early last year about how he had been derailed yet again by the death of a family member, and Mark said to him “the only one stopping you from writing is you.”

Since then, Scott has gone back to writing in a big way, finishing more than a dozen short stories – some new, some that he had started years before – and seeing his first sale. He’s embarking on a new trilogy, and also runs the Queer Sci Fi (http://www.queerscifi.com) site, a support group for writers of gay sci fi, fantasy, and supernatural fiction.