The Captain’s Pet by Samantha Cayto is a futuristic sci fi romance.  What starts out as sex slavery soon turns into a tentative emotional bond with a promise for more.  I received one copy of this book at no charge from the publisher in exchange for my honest review.  All opinions are my own and this post contains affiliate links.

The Captain’s Pet by Samantha Cayto 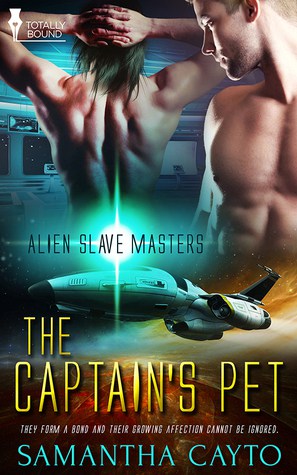 In a not-too-distant future, a lopsided war has led to aliens invading and occupying an Earth settlement. Wid is a young colonist who has been caught harassing the aliens. He and his friends are rounded up and sent to an alien warship patrolling the disputed space. His fate is to serve as a sex slave for the ship’s imposing captain. Wid, at first, fights against his enslavement, but soon learns that not only does he stand no chance against the much larger and stronger captain, he isn’t sure he even wants to.

Like all Travian males, Kell is bound by duty to defend his people. Having risen to the rank of captain, he nevertheless chafes against the boring and endless patrol of the space invaded by the humans. His misses his family and constantly guards against his scheming first officer. He sees his reward of a human sex slave as more of a nuisance. Yet the pretty, fair-haired human’s exotic allure is hard to resist. He finds far more pleasure in the use of his pet than he would like.

Kept naked and leashed, Wid’s days are filled with boredom, while his nights wrapped in Kell’s arms turn from fear into pleasure. Even as the humans plot their escape, Wid and Kell form a bond and their growing affection cannot be ignored. When tensions boil over among the aliens, Wid and his friends may be Kell and his crew’s only chance for survival.

Reader Advisory: This book contains sex scenes of both non-consensual and dubious consent, as well as scenes of violence, abuse and torture.

Please be aware of the reader advisory for The Captain’s Pet.  This book contains numerous scenes of rape and dubious consent.  If this is a trigger for you, please don’t read this.

I wasn’t sure how I would feel about The Captain’s Pet since sci fi and rape are not usually something I am drawn to in a romance book.  I’m not sure ‘romance’ is the right category, although at the end of the book there is definitely a tentative emotional bond between the two men.  I was surprised at how much I enjoyed this story and it really grabbed my attention quickly.

Wid is from a planet that is being colonized by humans.  They had to leave Earth due to dwindling resources and chose a planet that they did not realize belonged to another species.  Kell is the captain of the Travian battle ship sent to keep an eye on the humans inhabiting their planet.  When Wid and several of his cohorts are captured in the midst of causing trouble, they are sent by the Travian High Council to serve as sex slaves for the men on the battle ship.  Kell doesn’t much want a sex slave, however to refuse would be insulting. He and Wid form a tentative bond and when an internal uprising puts Kell and many of the other Travian soldiers in harms way, the humans realize they are better off as sex slaves to the men they KNOW than suffering under the ruling crew that takes over.

Wid was an emotionally strong and very intelligent character.  He quickly became the leader of his little band of humans without even realizing it.  I like when leadership is earned rather than taken. His emotional struggles were well written…torn between hating the life of a sex slave and actually beginning to like his captor.

I have to say that I actually liked Kell.  Yes, he treated Wid like a pet but that was how their culture treated male sex slaves.  Calling him an ‘it’ and leading him on a leash wasn’t really meant to be derogatory and mean, it was just how things were done.  He was a strong leader and respected by his crew.  He did not come across as exceptionally cruel, even though he was definitely raping Wid.  It was merely a necessity so that his scent was firmly present on his sex slave for all to notice.  Not an excuse, since as Wid pointed out there is more than one way to scent mark a person, but he didn’t come across as a brutal and cruel man.

The details in this story were wonderful…from the healing waters to the abundant food.  I could almost see the shimmering yet hidden wall portals that led to the air ducts in my mind. The author really put a lot of thought into the creation of the setting for The Captain’s Pet.

The story does not really have a happy ending.  I am hoping that book 2 picks up where this one leaves off.  There is a ‘content for now’ ending that really leaves things up in the air.  I will be checking out book two as soon as it is available.  The author is an incredibly good story teller and I want to know how this relationship turns out.