The Heart As He Hears It by A. M. Arthur 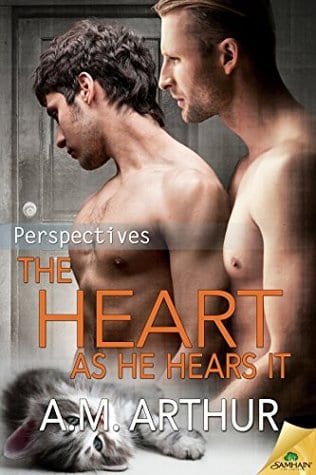 Title:   The Heart As He Hears It

About the Author:  Learn more about A.M. Arthur by checking out the author’s website or following along on Facebook.

While most of his friends have moved on to “real” careers, Jon Buchanan is content skating through life as a part-time waiter and gay porn star. Firmly single thanks to a previous relationship disaster, he focuses his spare time on Henry, a dear friend dying of cancer. And with Henry’s happiness paramount, Jon is on a mission to help Henry meet his recently discovered grandson. Isaac Gregory hasn’t set foot outside for the past year. He has everything he needs delivered, and his remaining family knows better than to visit. When a complete stranger shows up claiming to be his grandfather-with a distractingly handsome younger man in tow-his carefully structured routines are shaken. Despite his instant attraction, Jon senses Isaac is too fragile for a relationship. Yet tentative friendship grows into genuine companionship. And when Henry’s health begins to fail, they realize Fate brought them together for a reason.

The Heart As He Hears It by A. M. Arthur is book 3 of the Perspectives series.  It can be read as a standalone novel, however you will meet couples from the previous books so I recommend getting to know them first by reading the series in order.

Isaac is agoraphobic and doesn’t leave the apartment ever.  When Henry and Jon show up at his door he is both terrified and oddly drawn to them.  Thankfully Jon is smart enough to figure out that Isaac is emotionally unstable and NOT ready for a relationship.  There is a wonderful, slow buildup of friendship.  The smallest hints of attraction, inexperienced (on Isaac’s side) fumblings and slowly comes a passionate relationship and true love.

I love the characters that are created in this story.  They are unique, slightly flawed, and each have their own worries when it comes to life and love.  Isaac is so scared and naive and worried about so many things.  Jon seems like he wouldn’t be a good fit for Isaac but honestly Jon makes him want to grow as a person and experience new things in life.  And of course, a cute kitten gets thrown into the mix which really throws Isaac for a loop!  Gotta love a romance book with cute critters in it to up the AWWW factor!

There is no getting away from the sadness of this story.  Hopefully this isn’t too much of a spoiler for you but Henry passes away.  There is no miracle cure to be found before the end of the book.  The story is pretty heavy at times and covers some really intense issues.  But, woven into this sadness is also hints of hope, love and freedom.  The end of the story was a combination of both tears and smiles as Isaac and Jon get their happily ever after even as they have to say goodbye to Henry.

Overall, The Heart As He Hears It by A. M. Arthur is an emotional love story between two very flawed men who are better together than they every were apart.  Definitely a must read.

Check Out The World As He Sees It by A. M. Arthur 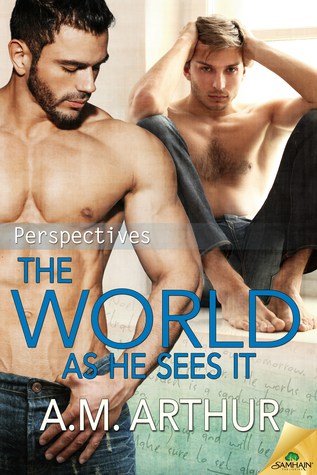