In The Secrets in My Scowl by A.E. Via , sparks ignite and tempers flare when a sexy, optimistic wedding planner moves his business in across the hall from a jilted, divorce lawyer’s practice. I received one copy of this book at no charge in exchange for my honest reviews but all opinions expressed here are my own.  This post contains affiliate links.

The Secrets in My Scowl by A.E. Via 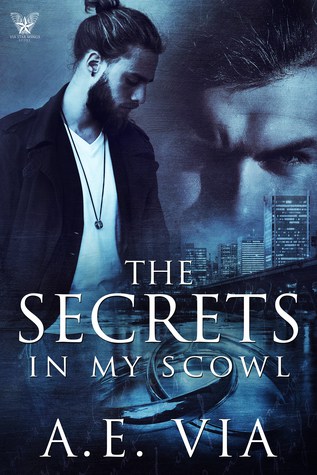 Title:   The Secrets in My Scowl

About the Author:  Learn more about A.E. Via by checking out the author’s website or following along on  Twitter.

From high school, up until he became a successful attorney Jacob Snowden was convinced that love had it out for him. “Everyone left,” were the words he lived by. His mother, his high school sweetheart, his father, and his fiancé, all left Jacob just when he felt it was safe to let down his guard. Not any longer. Jacob was a determined man, set at keeping people at a distance. If his six foot one, military-made body didn’t scare people off, his permanent scowl surely did. At almost forty, Jacob’s social life was non-existent, but he told himself his work fulfilled him. He helped people get out of their loveless marriages. Jacob Snowden was one of the best divorce lawyers on the east coast and was damn proud of it. So, imagine his disdain when a wedding planner moves into the suite directly adjacent to his… an insanely masculine, male wedding planner.

Wylde Sterling had made quite a name for himself in his hometown of Roanoke, Virginia, working for a wedding planner that catered to the elite. He was known for his charm and impeccable taste. Yep, he was incredible at giving couples the wedding of their dreams. But he wanted nothing more than to plan his own. After striking out in love more times than he cared to admit, Wylde decided to start his own business in a new city, hoping Richmond would give him a fresh start. Things started out wonderfully – until he started to piss off the angry divorce attorney next door.

Wylde could see past Jacob’s mean scowl, knowing there was a reason for it. It was the man’s defense mechanism, his means of keeping people away. Everything in Wylde told him to stay away, but he believed Jacob just needed to meet a man who had been hurt as badly as he had.

The Secrets in My Scowl by A.E. Via is basically the story of one man who has been hurt so many times that he just can’t find it within himself to care about a single person ever again.  Jacob is downright mean and uncaring but his history really messed him up emotionally. Becoming a divorce lawyer was the perfect career for him!  Wylde, carefree and optimistic wedding planner, can see beyond Jacob’s angry bark to the needy man hidden inside.

This is a long book and the characters don’t actually meet until about the 25% mark.  The first portion of the story gives you a detailed look at Jacob’s history.  He was hurt by his first love, abandoned by his father, jilted by cheating boyfriends and basically just had his heart stomped on for most of his life until he meets Wylde.  I must admit, I found it hard to like him.  In fact, I really rather hated him for the way he treated people. I was a bit slow to warm up to this story, mainly because he was so unpleasant but also because I really wanted to see the characters get together a little bit earlier.

Wylde is so darn cheerful and optimistic that Jacob is about ready to strangle him upon their first meeting.  There is definitely tension between them right from the beginning and NOT the good kind!  Jacob continues to be angry and Wylde continues to be pleasant in return. You start to see a few cracks in Jacob’s armor and there is a glimmer of hope.  I find myself smiling at his newfound happiness.  He doesn’t really WANT to be alone but he is just too scared of getting hurt again to trust anyone with his heart.

I liked that they didn’t tumble right into bed in some sort of angry tryst.  There is a fair amount of sexual tension but developing a relationship is more important to them than the sex.

I will say that some of the drama seemed a bit forced in areas.  While some of it was written to show us how detached Jacob was from life, it just felt a little unrealistic.  There were also a few too many editing errors which pulled me out of the story on more than one occasion.  However, mine was an ARC so maybe those will be addressed in the final story.

Overall, though, I think The Secrets in My Scowl by A.E. Via was a good story which shows us that the human heart can be healed with enough tender loving care.