To Mate a Wolf by Jordan Ashton is book 2 in the series ‘Shifters of the Claiming Kind’ by Jordon Ashton.  Evan Michaels has just become the mob’s number one target. They want him dead before he can tell the police what he knows. Chandler Brooks opened his home to Evan Michaels but he never imagined he’d open his heart, too. This post contains affiliate links.

To Mate a Wolf by Jordan Ashton 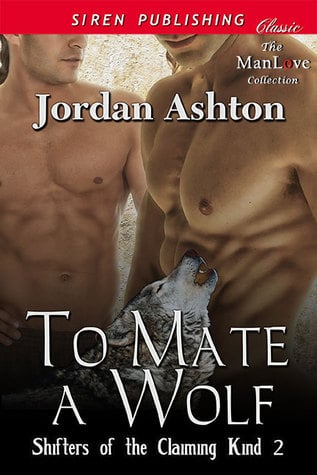 Evan Michaels has just become the mob’s number one target. They want him dead before he can tell the police what he knows. When the Brooks brothers, five kind and brave wolf shifters, offer their aid and protection on their cattle ranch, Evan jumps at the offer.

Chandler Brooks opened his home to Evan Michaels, a cute half-lynx who was in dire need of his and his brothers’ protection. But he never imagined he’d open his heart, too. All this time he thought an eternal mate didn’t exist, until Evan came into his life. He tries to win the frightened and cocooned half-lynx’s heart and make him his life mate. But a past lover returns, determined to ruin any chance Chandler has at love and happiness.

Can Chandler make Evan trust him and open his eyes to the everlasting love that exists between them, while protecting him from a hidden and deadly danger lurking nearby that’s ready to strike?

To Mate a Wolf

When they got to the range, Chandler removed his hat and rested it on a wooden post, then waltzed up to a magnificent black horse. Patting its black mane, he said, “This here is Wanda. She is a thoroughbred. I bought her from our neighbor Sal Winfred. He owns several racehorses. She’s too old to race competitively anymore, but she’s perfect for us.”

He turned to get the burgundy leather saddle resting in the corner of the stall and hauled it over her, securing the straps on both sides.

Jumpy and fearful, Evan stammered, “D–do you have a super slow pony I can ride instead?”

Chandler laughed, his pearly white teeth sparkled in the beaming afternoon sunlight. “Wanda is the slowest and tamest we have, I’m afraid.”

Evan’s armpits began to perspire with his apprehension, and he really regretted wearing this light blue T-shirt which turned dark blue when it got wet. Soon he’d be a sweating slob. And if he lost his grip on Wanda and landed on his ass or his face in front of his dreamboat hunk, well, there went any chance of making a good impression.

“All right. I–I guess I have no choice but to ride her,” he stuttered.

“I’ll be riding with you, if that reassures you.” He gave him a slanted, flirty smirk.

Panic and excitement twirled around Evan like a tornado, making him anxious and super uneasy. He hoped he didn’t forget to put on deodorant after coming out of the shower, because with all the sweating he was doing, he’d start smelling like the horse they’d be riding pretty soon.

“Unless you prefer to go solo…” Chandler tilted his head to the right.

Evan shook his head. “No, believe me, the last thing I want to do is ride Wanda solo. I’m scared I’ll hurt her or she won’t like me and hurl me off.”

Chandler held out the stirrup, grinning. “No, she would never do that to you. She likes you a lot. You’re a super likable guy, you know.”

Evan blushed as he put his foot into the stirrup and hoisted himself onto Wanda. Her wide girth had his tense inner leg muscles stretching.

After Chandler positioned himself behind him on the horse, he wrapped his arms around Evan to reach for the reins. Evan lost his breath when Chandler’s nose tickled the back of his neck through his stretching movements. His heart raced fast. He could feel its pulse in his throat.

“Sorry about that,” Chandler apologized.

“It’s okay.” Evan squeaked and coughed, trying to clear the nervousness from his throat.

Chandler’s cologne smelled sweet, alluring, and very familiar. Was it Drakkar Noir he wore? Before he could ask him if it was, Chandler squeezed Wanda’s sides, and she began to gallop slowly.

“Yeah,” he mumbled, trying to get a grip on his raging hormones and stop his churning stomach.

Wanda continued to gallop at a steady pace. Soon Evan’s drumming heartbeat settled to its natural pace as his fear began to subside. He stared out at the vast grasslands. It was breathtaking. He’d only witnessed this type of view in movies or still life photos, but never in real life.

As if reading his mind, Chandler said, “It’s thirty acres. My parents started this ranch some thirty-one years ago. They had just moved to Oklahoma when someone told them that this place was being sold through an auction. The previous owner had passed away. He had no kids or wife, or any other family who could inherit it, so it went to the state upon his death.

“They got it at an amazing price. My brothers and I have always lived here. It’s the only home we’ve ever known.”

Chandler nodded, gazing around as well. “Yes, it is.”

After a moment’s silence, Evan turned to stare into his eyes. He said, “Felix told me your parents died when you were only twenty-one and you had to look after your four younger brothers all by yourself.”

Chandler stared back in silence. He wasn’t smiling nor frowning, and he seemed to simply be thinking. Evan wondered if he was remembering the past and how it must have been hard for him to have so much responsibility put on his shoulders at such a young age.

“Yeah, I did. I also had to take care of the ranch. It was really difficult at first, especially with Bane, my hardheaded brother. It isn’t easy for two alpha wolf shifters to get along. And at that time he was a rebel, to say the least. But we all found a way to get along and work together.”

Chandler chortled. “Thanks. No one has ever called me that before.” His laugh turned to a soft smile. “And so are you.”

Blushing once again, Evan lowered his gaze. “No, I’m not. I was never like you. I wasn’t a responsible person or caring of others. I was the opposite. I let my brother and my mom down.”

Chandler gently touched his chin, lifting it so Evan’s eyes would meet his. “You were young, and didn’t know any better. But now you do and have changed. So stop putting yourself down and be proud of who you’ve become. Evan Michaels, you are one remarkable, handsome, amazing guy.”

He leaned in, joining his warm lips to Evan’s. Electricity traveled through their contact, taking Evan’s breath away. 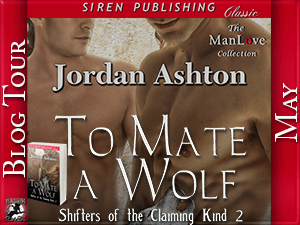 Enter to win a $50 Amazon Gift Card and an ebook copy of books 1-5 in the Shifters of the Claiming Kind series.  This giveaway will run for 3 months and please follow the directions in the widget below to enter to win!
a Rafflecopter giveaway