Truth & Tenderness is book 6 in the Faith, Love & Devotion series by Tere Michaels.  Check out my recent author interview for more information on the creation of this story and read my review of Cherished and Blessed which you should read before tackling this one! I was provided one copy of this book at no charge in exchange for my honest review but all opinions are my own. This post contains affiliate links. 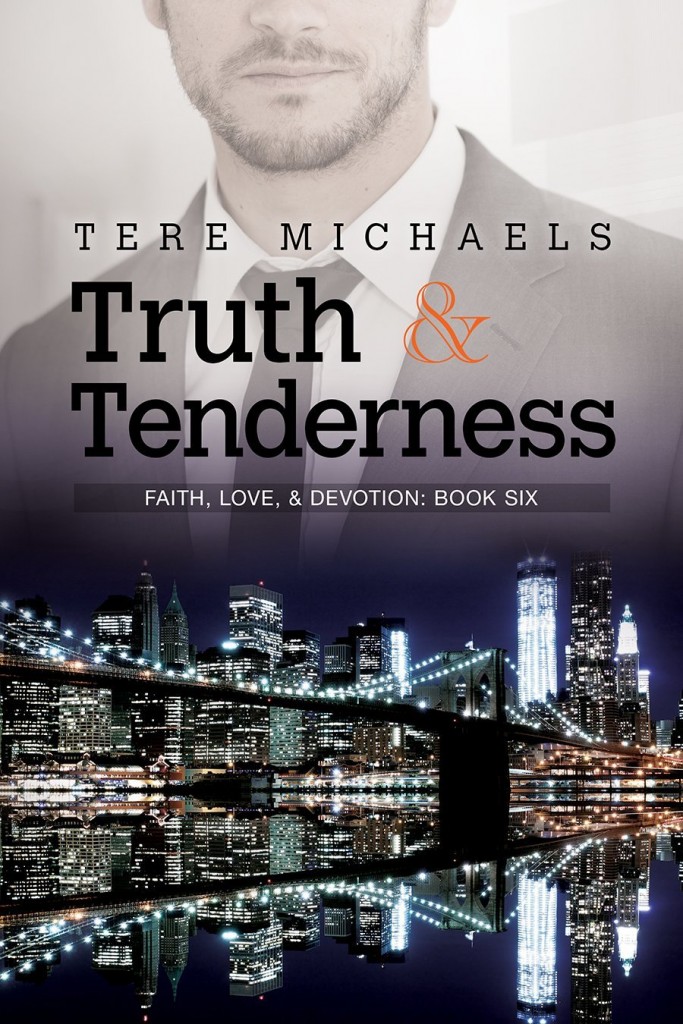 Newly promoted police captain Evan Cerelli takes command of his own precinct as Matt Haight’s security business begins to expand at a rapid rate. Both of their careers require more and more of their time—away from home and each other. When his most famous clients, Daisy and Bennett Ames, suffer a traumatic breakup, Matt is drawn into a dangerous and dramatic situation. With attentions diverted, Evan and Matt’s tight-knit home life begins to unravel.

As Griffin Drake’s movie nears final edit, his thoughts turn toward building a home with his new fiancé, Jim Shea—and maybe even starting a family. Before he can think of a new family, Jim is caught up in his past. The possibility of putting Tripp Ingersoll in jail once and for all beckons, and Jim wants the closure that has long eluded him. As a new lead spurs him on, Jim begins to lose sight of the future by chasing an old ghost.

Both couples struggle to remember that “happily ever after” requires hard work, trust, and tender, open hearts.

I have been a huge fan of the Faith, Love & Devotion series since Tere Michaels published the very first one.  Something about Matt and Evan in that first book just grabbed me and sucked me in.  You definitely need to read all of the books in the series in order to truly understand the characters and their dynamic.

We start out with Evan finally making captain and Matt with his hands busy raising the kids while running his own security firm.  Jim and Griffin are back from their around the world walkabout and struggling to balance their desire to get married with their need to finish a few projects from their pasts first.  Daisy and Bennett make an appearance in this book a bit more than any of the others and they have their own drama to deal with.  With so many characters to follow we don’t get to focus too much on Evan and Matt which I was a little bummed about since they are my all time favorite pair of the whole cast of characters.

I don’t want to give away too much of the plot.  I found that in Truth & Tenderness there were a lot more ‘outside forces’ acting on these characters than in previous books.  The characters not only have to deal with the struggles within their own relationships but also the impact other people have on their lives, career aspirations, and pasts that don’t want to stay gone.

Things I loved about this book:

Matt and Evan.  Always my favorite pair!  The love they have for each other is overwhelming, even if it takes a bit of a beating now and then.  Evan has become confident in his ‘gayness’ and these two are just so right together.

The supporting characters that Ms. Michaels has created are awesome.  I love Helena and Shane and the kids have all grown into amazing ‘almost adults’.  I was happy to see Miranda a bit more pleasant in this story.  She has been a bit of a snot lately!

Jim and Griffin were dealing with issues most new couples deal with.  Setting up a home, balancing career with relationship, deciding what their ideal family situation will look like.  Jim is very focused on a past murder he is trying to solve and Griffin has a movie to produce.  Those two things play a huge role in their lives and the relationship does take a bit of a hit from that.  But, it was a realistic struggle that they do manage to overcome.

Things that I didn’t really enjoy:

Daisy and Bennett were not my favorite couple in this book.  I just couldn’t relate to their superstar lives very well although their lives are intertwined with Matt, Evan, Jim and Griffin so it made sense for them to be in the book.

There is a blowup at the beginning of the book between Matt and Evan that seems a bit out of character.  The argument itself was justified but their reactions seemed a bit unlike them.  The drama sets the stage for the next scenes but I think it could have been taken down a notch or two. Bennett’s behavior also seemed uncharacteristic.  For a loving and doting father and husband I would not have expected him to make such poor choices.

Overall, I really enjoyed Truth & Tenderness and definitely think it was a nice ending for all of these couples.  Matt and Evan end up settled and happy.  Jim and Griffin will have their hands full with their new life together in the coming years.  And Daisy and Bennett may even end up working things out in the future.

I am sad to see this series come to a close but maybe a short story is in their future?……