In Unexpected Heat by Eola Eden, you have a unique world of shifters who have ties to the magical world.  When the yearly heat sends Nitro Blackwood into a club looking to work off his sexual hunger, he never imagined the changes it would bring to his life.  Keep reading for my full review!  This post contains affiliate links.

(free on Amazon at the time of this review) 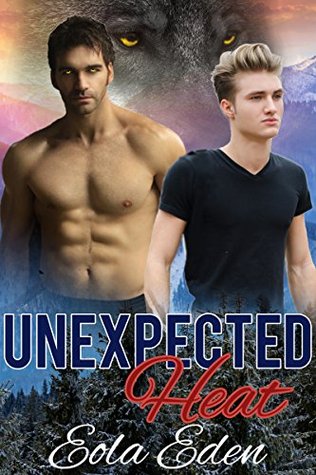 About the Author:  Learn more about Eola Eden by checking out the author’s Amazon Page

Lone wolf Nitro Blackwood doesn’t like people. As far as he’s concerned, the human world doesn’t exist. But for a few short days every year, the heat takes over and the undeniable urge to mate draws him to San Francisco and out of his self-imposed solitude. He’s willing to deal with all the foul odors, congestion and general misery for some bump and grind action.

Computer programmer Peter Callaghan likes his quiet, boring life. But like every year since his seventeenth birthday, a rampaging need to screw every guy with a heartbeat takes over. During this time, he finds he can climb out of his shell and be a normal, horny and slightly sarcastic twenty-five-year-old. Peter knows the hulking man with a biker’s name will go down in history as his hottest bang, but Peter gets more than he bargained for. When the man shows up several weeks later, raving about pregnancies and mythological creatures, Peter realizes he’s being held captive by a crazy person.

Except, things start to get weirder. After escaping, Peter is chased down by a rabid wolf, and Nitro pops out of nowhere to rescue him sporting fur, fangs and claws. As Peter witnesses the unimaginable, he realizes Nitro might be telling the truth about more than him being a shape-changing beast. Having been thrust into a mysterious and bizarre world, Peter is forced to rely on Nitro and something long buried inside Peter begins to awaken.

But could they possibly have a future together?

Nitro has lost his family and retreated into the woods.  He only leaves his protected space once a year when his heat drives him to find relief in the city.  This particular trip has him finding Peter and nothing will ever be the same again.

Peter is, or so he thinks, a pretty normal guy.  He works.  He has a healthy relationship with his family.  And he is a tad bit bored with his life without even realizing it.  The only ‘odd’ thing that happens is his yearly ‘twitterpation’ (as he calls it) that drives him into a sexual fever that is difficult to quench.  When it hits this year, his internal senses are picky.  They seem to be looking for one particular thing.  And they find it in spades with Nitro!

Unexpected Heat by Eola Eden is set in a unique world where shifters were created by witches.  It was a world I have never seen created before and was quite intriguing.  I commend the author for her creativity and while there was a definite ‘dominant alpha’ and ‘submissive omega’ theme going on it wasn’t totally overdone.  Nitro was dominant without being a jerk about it and Peter still retained his own voice and didn’t just do whatever he was told.  At least not without a bit of  attitude.

I liked that the list of characters was limited and the plot was focused and to the point.  There was a nice balance between Nitro and Peter’s relationship and the pregnancy and the drama unfolding with Nitro’s brother and the threat to Peter’s safety.  It was engaging with just the right amount of action, chemistry, and tenderness.

There were only a few things that really jumped out at me that drew me out of the story.  The first was a handful of typos.  Not a huge number but enough that I definitely caught them.  Also, for some reason having Nitro call Peter ‘the male’ throughout most of the story seemed very callous and too distant.  They weren’t mates yet but another word needed to be there to indicate affection, not just ‘that male’.  The only other thing that really bugged me was Peter’s complete dismissal of his old life.  He just abandons  it completely.  I would have liked to see him fight a bit to keep his past life rather than just ditch it all and forget about it.

Overall, Unexpected Heat by Eola Eden is a very enjoyable story with a unique setting and two characters who I really enjoyed getting to know.