Unsaid by Avery Aster is a sexy soap opera style romance book with a large cast of characters who live incredibly busy lives! I received one copy of this book at no charge in exchange for my honest reviews but all opinions expressed here are my own.  This post contains affiliate links. 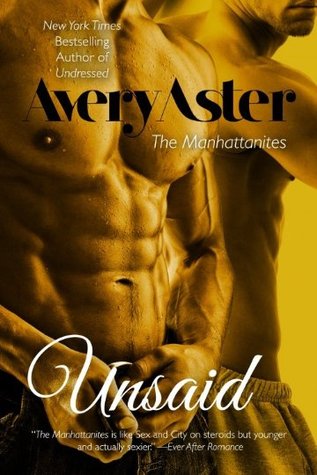 Chelsea’s hottie Blake Morgan III has reemerged from a nasty breakup. His marriage was a frigid disaster beyond repair, and he vows to be single—forever. Bruised, but still hot in Prada, he creates his Seven Desires wish list, his sexiest imaginings. Blake soon realizes there’s only one man he may trust to make these uninhibited intentions come to fruition: his best friend Miguel Santana.

Lower East Side multimedia artist extraordinaire Miguel Santana may be known as the cocky Latin stud in the city, but all he’s wanted since college was Blake’s hand in marriage. He was livid when Blake walked down the aisle with the wrong guy. Miguel has his own list titled the Seven Needs, which are quite contrary to Blake’s dirty-boy deeds. They involve serious commitments, which may leave his new-to-the-singles-scene buddy sprinting for the door, destroying any hopes Miguel has for happiness.

Can these two hunks conquer their intimate fears and love one another as only best friends can? Join the star-studded cast in The Manhattanites series and see for yourself!

Unsaid by Avery Aster is the third book of a series.  According to the author you can read this as a standalone novel, however I didn’t read the first two and honestly was pretty confused about most of the characters.  There is an intro to the book with character bios and histories but they got a bit jumbled in my head.

This is more of a soap opera than a romance book.  There are several couples and story lines from the previous books that take up a large chunk of this story.  The relationship between Blake and Miquel is only a very small part of this book

In a nutshell, Blake has become recently divorced from Diego, who is a very unbalanced and seriously messed up individual.  Blake has sexual desires that he has wanted to fulfill and his friends decide to add a few things to the list and convince Miquel, a good friend, to fulfill the list for him.

Miquel has quietly hidden his feelings for Blake for years. He is happy to fulfill Blakes sexual desires but has created his own list of wants to ensure that he and Blake develop an emotional connection as well as a physical one.  They move in together and start moving through both of their lists.

The entire interaction between Blake and Miquel bugged me from the very beginning.  They are supposed to be good friends but I just didn’t feel that connection between them.

There is so much else going on with this story besides Miquel and Blake that I can’t even include it all.  Wedding planning, unexpected pregnancies, alcohol addiction, and a whole lot of other drama.  I found myself skimming over most of it since I didn’t read the other two books and really could not connect to the characters in the story.

I just think maybe Unsaid by Avery Aster isn’t my kind of book. There were too many people dealing with WAY too much drama.  I couldn’t get into the dynamics between the main characters and while there were aspects of both guys that I liked, I just didn’t like them enough to enjoy the story at all.