In Valor on the Move by Keira Andrews, Shane would give his life to protect the president’s son. But he never expected to risk his heart. I received one copy of this book at no charge in exchange for my honest review.  All opinions are my own and this post contains affiliate links.

Valor on the Move by Keira Andrews 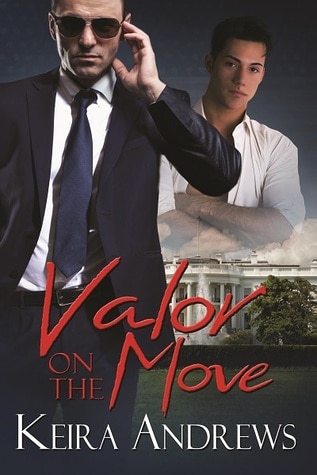 Valor on the Move Blurb: Growing up gay in the White House hasn’t been easy for Rafael Castillo. Codenamed “Valor” by the Secret Service, Rafa feels anything but brave as he hides in the closet and tries to stay below the radar in his last year of college. His father’s presidency is almost over, and he just needs to stick to his carefully crafted plan. Once his family’s out of the spotlight, he can be honest with his conservative parents about his sexuality and his dream of being a chef.

It’s definitely not part of Rafa’s plan to get a new Secret Service agent who’s a walking wet dream, but he’s made it this long keeping his desires to himself. Besides, it’s not like Shane Kendrick would even look at him twice if it wasn’t his job.

Shane’s worked his way up through the Secret Service ranks, and while protecting the president’s shy, boring son isn’t his dream White House assignment, it’s an easy enough task since no one pays Rafa much attention. He discovers there’s a vibrant young man beneath the timid public shell, and while he knows Rafa has a crush on him, he assures himself it’s harmless. Shane’s never had room for romance in his life, and he’d certainly never cross that line with a protectee. Keeping Rafa safe at any cost is Shane’s mission.

But as Rafa gets under his skin, will they both put their hearts on the line?

Valor on the Move Review:

I have one requirement for a 5 star rating:  The book has to be one that I cannot put down.  A book that makes me cook dinner one handed so I can hold my ereader with the other.  A book that I stay up til midnight to finish even though I am exhausted.  Valor on the Move by Keira Andrews was that sort of book.  I kept turning page after page and could not put it down!

In Valor on the Move, we meet Rafa (codename Valor) who is the youngest child of the President of the United States.  The president and first lady are both Hispanic and have risen from not so glamorous or wealthy families to achieve this position of greatness. They are Republican, although not as conservative as the party has presented them to be.  At 22, Rafa has never felt like he can be himself.  He keeps is sexuality in the closet and his love of cooking is frowned on by his mother.  This is a close knit family with a lot of love but not a lot of communication.

Shane is a 39 year old secret service agent who lives for his job.  His family was tragically killed in a fire several years ago and he has closed off his heart ever since.  He is nursing a lot of hurt inside and dedicates himself to his job, with the goal of one day protecting the president himself.  When he is put on duty protecting the President’s son,  he sees it as an opportunity to rise in the ranks and is determined to do his best to protect young Rafa.  He certainly never intended to fall for his protectee!

I loved Rafa’s character.  He was young, yes…but somehow seemed mature well beyond his years.  He had a plan for coming out and living his life to the fullest and was mature enough to realize that doing so while he was in the White House was probably not the wisest idea.  The author did such a good job of developing his character.  From the teasing of his classmates in highschool to his love of cooking and his determination to just keep his head down and remain unnoticed, he really just came to life for me.

Shane was the perfect balance of determined, nose the the grindstone secret service agent and soft hearted romantic. He carried so much hurt from losing his parents that it practically radiates from him.  His determination to protect Rafa at all costs just tugged at my heart.  He couldn’t protect his parents but he would darn well protect Rafa or die trying.  And he almost did!

Without giving away too much of the story, let me just say that when danger finally strikes, it is intense and the suspense will have you glued to your book until the very last scene.  The mystery of who does what and how the whole thing play out was incredibly riveting and I honestly had no idea of the outcome until it was presented to me!

The romance itself is incredibly sweet and at times amazingly hot.  There is an 18 year age difference between Rafa and Shane.  While is could just be considered a ‘crush’, it really is more than that.  Rafa is mature for his age and Shane is a natural protector.  Shane is honorable about his role as protector and there isn’t a whole lot the happens physically while he is actually serving the White House family as guardian.  The steam level is low-ish for most of Valor on the Move but when they do get together it is the perfect balance between hot and dirty and sweet and tender.

I loved the ending of Valor on the Move.  The author gives us a glimpse of their happily ever after and I was smiling by the last page.  I will say that I REALLY want to see more of these characters!  I want to see them grow in their new life together and I want to see Shane teach Rafa every single thing he can about love, sex and romance.  In great detail 🙂

Valor on the Move is a truly amazing book.  You will not only fall in love with the characters but the story itself will draw you in and keep you captive.