In  Vespertine by Leta Blake and Indra Vaughn, a priest and a rock star obey love’s call but emotional and physical battles need to be overcome first. This post contains affiliate links. 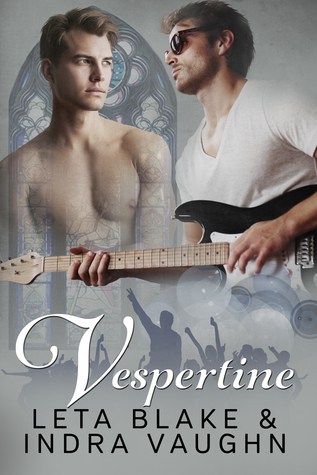 About the Author:  Learn more about the author by checking out Leta Blake’s website or Indra Vaughn’s website

Vespertine Blurb: Seventeen years ago, Jasper Hendricks and Nicholas Blumfeld’s childhood friendship turned into a secret, blissful love affair. They spent several idyllic months together until Jasper’s calling to the Catholic priesthood became impossible to ignore. Left floundering, Nicky followed his own trajectory into rock stardom, but he never stopped looking back.

Today, Jasper pushes boundaries as an out, gay priest, working hard to help vulnerable LGBTQ youth. He’s determined to bring change to the church and the world. Respected, admired, and settled in his skin, Jasper has long ignored his loneliness.

As Nico Blue, guitarist and songwriter for the band Vespertine, Nicky owns the hearts of millions. He and his bandmates have toured the world, lighting their fans on fire with their music. Numbed by drugs and fueled by simmering anger, Nicky feels completely alone. When Vespertine is forced to get sober, Nicky returns home to where it all started.

Jasper and Nicky’s careers have ruled their lives since they parted as teens. When they come face to face again, they must choose between the past’s lingering ghosts or the promise of a new future.

My Review:  Vespertine by Leta Blake and Indra Vaughn  was a book that I could not force myself to put down for 2 days.  Meals were skipped, laundry piled up.  But I was so emotionally invested in this story I could not stop reading from the very beginning.

In the first few chapters, the author paints you a picture of two very different lives.  Jasper seems happy as an openly gay Catholic priest in his tiny home town in Maine.  He loves his Parishioners and his job, although he seems a tad bit lonely to me.  He is passionate about the kids he is helping through Blue Oasis and that is definitely a mission that calls to him deeply. Not everyone agrees with having an openly gay priest but as long as he remains celibate, the higher ups look the other way.

Nico Blue is in a bad place.  He is surrounded by drugs with no one who truly cares for him.  He makes sad music that everyone loves.  He takes the drugs that everyone hands him freely because they quiet the feelings inside that he doesn’t know how to deal with.  And he has meaningless sex with strangers.  He connects to no one and he is hurting.

When things can’t continue on like that any longer, Nicky sheds his ‘Nico Blue’ rock star persona and goes home after a stint in rehab.  He is forced to confront the love of his life who left him behind to give his life to God instead.  Jasper realizes that loving Nicky is as important as breathing and that puts a bit of a crimp in his priestly choice of duty.

Honestly, there were moments in this book from the very beginning that almost had me in tears.  Nicky’s pain was heartbreaking and Jasper struggled with his emotions over own life choices when it came to Nicky.  Vespertine was incredibly well written…the words were vividly descriptive and paint a beautiful picture in my mind.  Little bits of information about each character just brought them to life on the page.  Jasper’s sweet tooth and the way song lyrics just pop into Nicky’s head.  I truly loved these characters.

Details are really what made this book for me.  The author’s research about addiction and recovery made Nicky’s struggle incredibly real.  It was clearly very well researched and added a wonderful depth to the story.

The depth of emotion that these two men felt for each other was touching.  They opened up to each other about past hurts and miscommunications.  They reminisced about childhood antics and their young love.  These are definitely two men destined to be together, no matter what.

I loved the secondary characteristics in this book as well.  The kids at Blue Oasis were unique, Nicky’s mom and dad were incredibly down to earth and I even loved Jasper’s cat.  Despite the bunny incident!

I was torn over the physical aspect of Nicky and Jasper’s  relationship.  They don’t jump into bed together but they are somewhat intimate before Jasper fully decides to leave the priesthood. But, the relationship and the need and the feelings between these two men just make you realize that they need each other like they need air to breath and somehow that just can’t be wrong.

I will be honest.  As soon as I finished this book I started it over again!  And I really think you will LOVE this story!