WHISKERS  OF  A  CHANCE
by Tempeste O’Riley 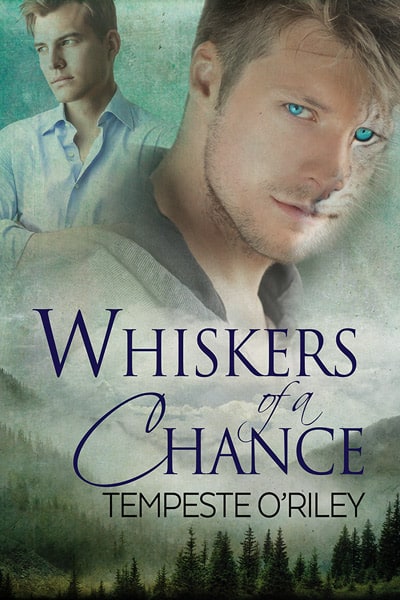 Jason Grant runs his own IT business from home, owns his own home, and has the best friend he could imagine. What he doesn’t have, or believe he will ever have, is love. When Jason catches a glimpse of his new neighbor on moving day, his libido ignites and his fascination in piqued. He even manages to concoct an excuse to go over and meet the man who makes him hope and want for more than he has in years.

Keith Skyler is a shifter in a world where his kind is known to only a few, but they don’t often mix and they never mate. Keith has been hoping for a mate since before he can remember, but gay lynx don’t have true mates. As far as he knows, they don’t have mates at all. However, while moving his little family across Seattle—and away from their tribe—his reality tips and spins more than he thought possible.

When these two men meet over a dish of five-cheese broccoli-noodle casserole, sparks fly. Who knew a welcome to the neighborhood gift could give both of them their chance at love?

In Whiskers of a Chance by Tempeste O’Riley, Jason is a slightly awkward IT guy working from home.  He spies his new neighbor moving in and is captivated.  Keith is a lynx shifter who has his home and tribe to set up house with his sister and nephew.  He does not see eye to eye with the alpha (his father) and wants his own space.  He has scented his mate in the area and assumes it will be a female.  Everyone tells him that gay lynx shifters just don’t exist, so he assumes he will not find a male mate.  When Jason turns up on his doorstep with a casserole he wastes no time in claiming him for his mate.  That part is easier than having said mate accepted by his tribe.

Like many shifter stories, this one starts out with the concept of “MINE” and moves very quickly into wild, passionate claiming.  I am not usually a fan of instantaneous sex when characters first meet but it seems to be a thing for shifter stories.  It was well written and steamy, although I would have preferred a ‘get to know you’ period first!

Jason is a genuinely nice guy.  A bit quiet and insecure but I loved his tender side.  He nurtures stray kitties (that just happen to be lynx shifters) and seems like a supportive boyfriend.  He is understandably swept away and a little freaked out about the whole lynx shifter thing but open minded and accepting.

Keith is like most shifters in that he is protective of his mate and family.  He is strong, smart, and determined to make his own way for himself.

I love the world that the author creates where vampires and shifters all live in the same story.  I particularly loved Sasha and hope he gets his own story soon!

The only real issue I had with the book is that too many things occurred ‘off page’.  There were many instances where something in the story was alluded to that you didn’t actually read.  I am not a fan of skipping points in the timeline of the story so this particularly bugged me.

Overall, though, I enjoyed Whiskers of a Chance.  The writing is solid, the characters well developed and I really enjoyed the setting.  I will have to keep my eye out for more books from this author!

“It’s wonderful you thought to schedule a slumber party for Taylor—” He just hoped she didn’t kill him for his comment. “—maybe I should call one of the guys and crash over at their place for the night?” Or three.

The sputtering on the other end of the line made Keith smile. His father hated when he didn’t do as he was told, but being in his father’s home as Adam threw women at him was not his idea of fun. “You will be here as soon as you arrive back home. You will present yourself with a smile on, clean, neat, and as close to happy as you can manage. You only have a few years before you take over as alpha, yet you still haven’t settled down. Don’t have an heir. Aren’t even seeing anyone.” Well, the man was wrong on the last two. He had an heir, through his sister: Zeke. And he was dating; Jason had agreed to start seeing him. They planned to spend the whole weekend together, in fact.

“I’m always charming and polite when you do this to me, but throwing big-boobed airheads at me is not the way to endear me to your wishes. I have no interest in mating until I find the other half of my soul. You know that.” And it will be a male that completes me, but we won’t mention that part yet….

“Such a childish attitude, Keith. Most shifters do not have fated mates, as you know, so waiting for someone who most likely doesn’t exist is asinine. Besides, as the heir, you are responsible for having children. You must have an heir! The Skyler line will not die out because you want to be too picky.”

“I will attend. I will talk to the women you picked out. However, I will not take any but my mate home with me. See you shortly, Father.”

Not waiting for a response, he clicked off the call and tossed his cell onto the seat beside him. Keith had to pull over a few minutes later when he realized he was shaking. He didn’t want the police to notice his weaving or distraction, nor did he enjoy the idea of wrecking his car. He loved his Shelby GT. He’d restored it from the junkyard he’d found it in back in high school. If it were up to him, it would be the only car he would ever drive. Eh, that or Taylor’s truck. His father’s heavy-handed manipulations were driving him crazy. He’d hated when his alpha tried to fix him up, but now that he’d found Jason, the idea made him ill to even consider.

It took him a little while, but he got himself under control—not that his cat was helping. No, he wanted to go back to Jason and claim his mate properly. He didn’t see why they had to wait. Once he was calmer, Keith entered the roadway again, and too soon for his liking, he pulled up in front of his father’s house. Before he’d so much as gotten the car door open, Taylor was there, waiting with her open arms and loving personality ready to wrap around him.

“I didn’t know about the fems ambush until just a little bit ago. I’m so sorry, Keith,” she whispered as she hugged him. “This batch has a few that aren’t the vapid, big-boobed wonders he usually finds you, at least.”

He knew she was trying to make him feel better, but the thought of any female, especially now, made his skin crawl and his cat want out. “Vapid or not, they aren’t my mate, Tay. It feels disloyal to even go in and pretend.”

“I get that, but unless you want to explain who your mate is tonight, which I don’t advise, then playing nice is the right choice. It’s not like you have to make out with them or anything. Just chat, be dull and boring, and escape as soon as possible.”

“I wish it were that easy. But I’ll be good, no matter how much I don’t want to.”

“I know, but you won’t have to put up with this very long tonight, and the gathering is tomorrow night, then you can escape. I can’t leave ’til this weekend,” she added, her bottom lip puffed out far enough to make many five-year-olds green with envy—especially hers.

“You’re going to love living there, Taylor. The trees are great, and I’ve already found areas that are flush with hares to hunt. I can’t wait to show you and Zeke.”

“Can’t wait to get there too,” she squealed. “But for now, go play nice prince and smile for the grumpy old cat in there.”

“Yeah, that makes me want to go right in. Oh yeah, no it doesn’t. But if we stay out here much longer, he’ll come out looking for me.” Swallowing hard and pasting on a smile, Keith followed Taylor into the house. The cloying scents of many perfumes attacked his nose before he’d gotten any farther than the entrance.

“How can you breathe in here?” he grumbled but made his way farther into the house to meet with his father’s newest batch of ever-hopefuls. Reminding himself that he’d get to spend the entire weekend with Jason helped him make it into the living room and beyond. 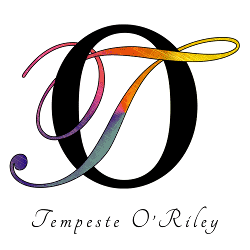 Tempeste O’Riley is an out and proud pansexual genderfluid whose best friend growing up had the courage to do what she couldn’t–defy the hate and come out. He has been her hero ever since.

Tempe is a hopeless romantic that loves strong relationships and happily-ever-afters. Though new to writing M/M, she has done many things in her life, though writing has always drawn her back–no matter what else life has thrown her way. She counts her friends, family, and Muse as her greatest blessings in life. She lives in Wisconsin with her children, reading, writing, and enjoying life.

Tempe is also a proud PAN member of Romance Writers of America®, Rainbow Romance Writers, and WisRWA. Learn more about Tempeste and her writing at http://tempesteoriley.com.