With Wings (The Dark Angels) by Z. Allora is a sweet and angsty romance between rock Gods who are actually real people with real problems. I received a copy of this book at no charge from the author in exchange for my honest review.  All opinions are my own and this book contains affiliate links.

With Wings (The Dark Angels) by Z. Allora 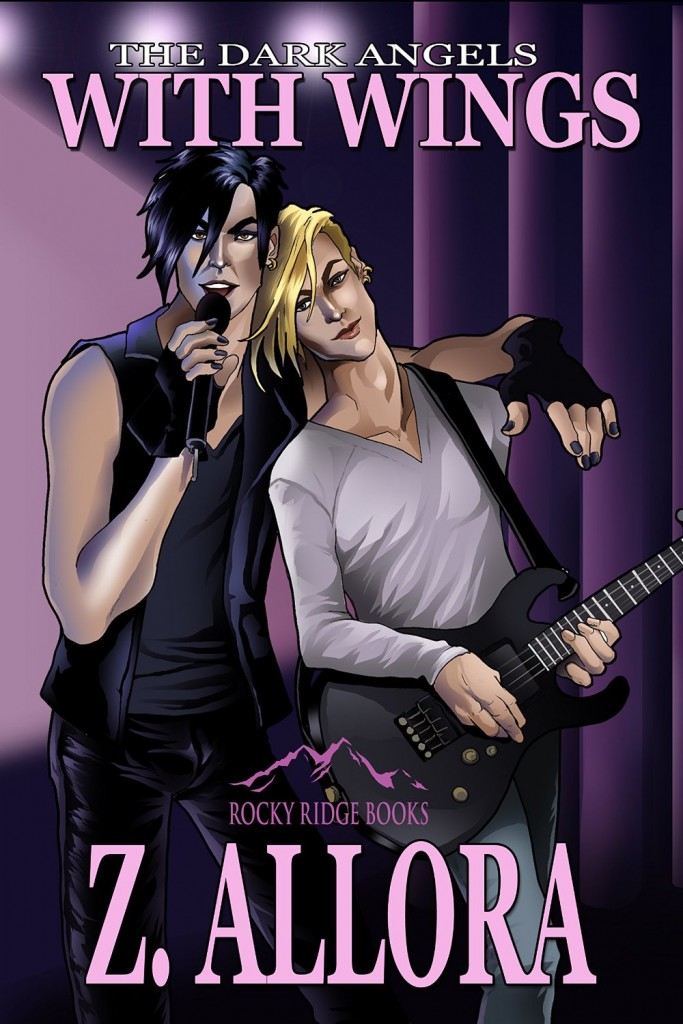 The lights go down and stage lights up. The Dark Angels have arrived. With his come-hither voice and body made for sin, lead singer Angel Luv draws lovers like a magnet. And when he caresses and taunts shy guitarist Darius Stone on stage, well…it’s an act, right? But every touch lights a fire, and every flirtatious glance chips away at Dare’s certainty that he’s straight. No one else has so captured his imagination.

Temptation beckons. It’s hard not to notice the want in Dare’s eyes, the way he stares when he thinks Angel’s not watching. One wrong move might scare him away, but a work trip to exotic Bali might be the perfect place to let Dare explore his sexuality, with none to be the wiser. But their “friends with benefits” pact has an expiration date, that just might sour their friendship.

In With Wings (The Dark Angels) by Z. Allora we first meet Darius Stone, who is playing guitar with a less than stellar band while he waits for his big break in the music business.  His big break turns out to be a sexy and mysterious guy in the audience by the name of Angel Luv. Angel is the lead singer in The Dark Angels, an up and coming rock band in need of a great guitarist.  Darius is definitely interested in joining the band but the chemistry he feels with Angel is confusing seeing as he has never once been interested in a guy sexually before.  Despite his ‘straight vs gay’ issues, Dare finds himself drawn to Angel as the band climbs the charts and stardom overwhelms them.  When the brand takes a break in their tour to work on new material, Dare and Angel head to Bali to work on some new songs.  Dare finally stops fighting his attraction to Angel and the two fall into a passionate ‘vacation only’ fling.  However, love sneaks in and refuses to be squashed just because vacation is over.

I really enjoyed both of these characters.  I liked that they had a nice balance of ‘rock God’ and ‘real guy’.  The interaction between the various band members seemed realistic and genuine.  The secondary characters were intriguing and hopefully we see more of them in coming books.  Angel comes off as drop dead sexy and flirtatious, both on and off the stage.  On the Bali journey, the reader gets to see a sweeter, lighter and more romantic side which I enjoyed.  I do think some of the on stage antics may have been over the top but I haven’t been to many concerts so maybe that is the norm nowadays.

Dare’s confusion over his attraction to Angel is evident from the very beginning and it took him a long time to get over the whole ‘I am straight’ concept.  He isn’t used to taking a submissive role in a relationship and his confusion and insecurity comes through quite a bit. A bit too much, I think.  There is a lot of internal dialogue and mental struggle regarding his sexuality and while I get that it is a hard fence to jump over, I think too much of it was put on the page to read.  I found myself getting annoyed at his insecurity rather than being compassionate about it.

I liked that these two really got to know each other before the sex comes into play.  When it finally does enter the story, it is hot and sexy and well written.  The two characters really connect and there is quite a bit of heat involved.

What really made With Wings slow going for me was that I needed more of a conflict, plot or side story to break up the relationship development.  This is a long story and it is very well written but there is only so much about a relationship and characters that I want to read about before I get a bit bored.  Some sort of mystery or drama to break up the character angst would have really made this a 5 star book for me.

I loved the detail that the author put into With Wings…there are tidbits about Bali that I found truly fascinating.  The characters are interesting and well written and the chemistry is hot.  But, I think a bit more conflict and less internal meandering would have made me turn the pages faster.