Working It by Christine d’Abo is an office romance with a whole lot of emotion to go along with the developing relationship. I received one copy of this book at no charge in exchange for my honest reviews but all opinions expressed here are my own.  This post contains affiliate links.

Working It by Christine d’Abo 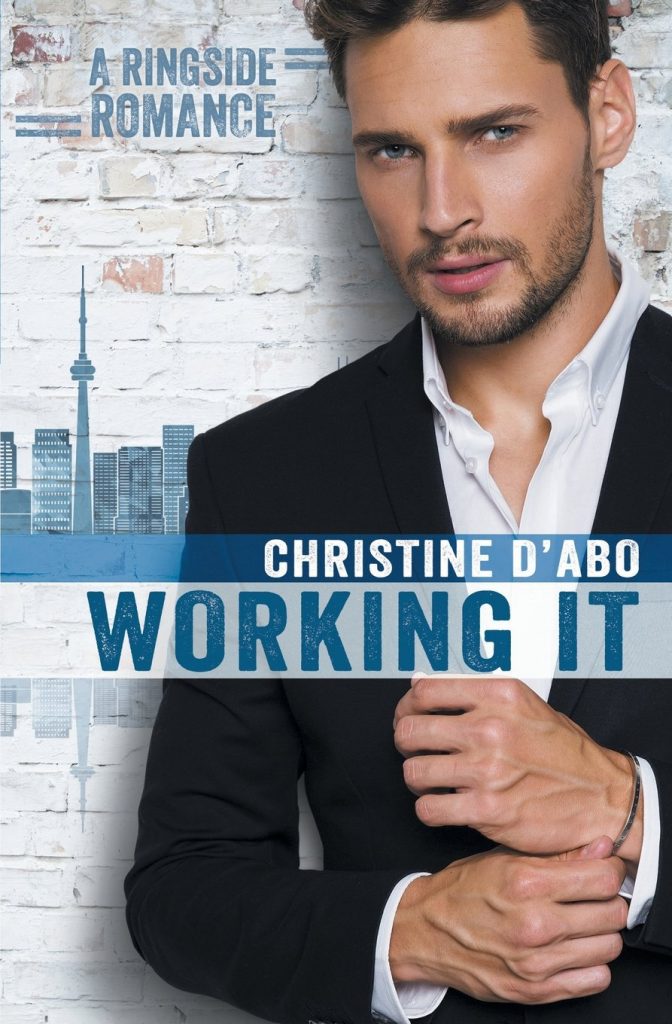 Deep in the heart of Toronto lies Ringside Gym. Once a safe haven for troubled teens, Ringside has gone derelict, a forgotten memory of past days. Until a group of friends set out to do what they can to bring life back to the ring and create a new home for LGBT youths.

But when their lives threaten to pull down their dreams, each man must turn to others to help make it a reality. Winners take all—but there are no losers in love.

Nolan Carmichael is getting a fresh start—new career, new company, new life. The only problem is, he liked his old life just fine . . . until an accident robbed him of his health, his job, his self-confidence, and his ability to go out in public without having anxiety attacks.

Zack Anderson has scared away his last four executive assistants. So when he hires Nolan on a whim, he’s not too worried, since Nolan will be gone within the week anyway. Two weeks later, Nolan has made himself indispensable, completely reforming Zack’s schedule, life . . . and libido.

But in a company already torn by internal politics, one wrong step could ruin both their careers. And not only are they working to reopen Ringside Gym, Zack’s retreat when he was a troubled teen, but they also can’t help themselves falling for each other. If only the rest of their lives could go as smoothly as things do when they’re alone together.

Working It by Christine d’Abo is an office romance with a whole lot of emotion to go along with the developing relationship.  The beginning started out strong with a bit of an enemies to friends thing developing.  Once they moved on past the hostility, there was some tender hurt/comfort tendrils thrown in for good measure.  I lost a bit of interest at the end when the relationship seemed to take a back seat to the business talk but overall this was a decent read.

Zac is not particularly nice but hidden inside of him  is actually a very decent soul. He comes off as angry and belligerent but he is also determined and has a goal that will give back to so many other people. He has dreams he wants to fulfill and is determined to do what he has to in order to achieve them.  He really does have some serious anger management issues but Nolan seems to bring out his more ‘human’ side.

Nolan is struggling to recover after a horrible accident. The last two years he has had to overcome physical and emotional problems that still haunt him. He is determined to move on. He has an independent streak and stands up to Zach when no one else will. They seem to develop a camaraderie. There is friendship blooming along with the passion. I really liked Nolan’s character.  He was complex and really touched my heart.

These two characters have some nice chemistry with a slow buildup that I appreciated.  I enjoyed how Zac’s character developed as Nolan tried to unravel him a bit.  I got bogged down at the end with office politics that I think got in the way of the final relationship development.  The characters don’t get a happily ever after so much as a happy for now kindof ending but it was still satisfying.

I am impressed with the author’s writing style and the story flowed fairly smoothly other than the ending.  The characters were unique and offered just the right push and pull to the relationship to keep you interested in following their story.  I will definitely be looking for more books by this author in the future.

Other Books by Christine d’Abo