All the Wrong Places by Ann Gallagher 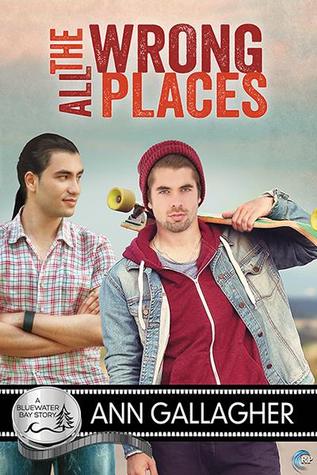 Title:   All the Wrong Places

All the Wrong Places Blurb:

Three cheating girlfriends in a row have given skateboarder Brennan Cross the same excuse: he wasn’t meeting their needs. Desperate and humiliated, he goes to the professionals at the local sex shop for advice.

Zafir Hamady, a sales clerk at Red Hot Bluewater, has an unusual theory: he doesn’t think Brennan is a bad lover. In fact, he doesn’t think Brennan is heterosexual. Or sexual at all, for that matter. He also can’t stop thinking about Brennan. But even if he’s right and Brennan really is asexual, that doesn’t mean Zafir has a chance. Brennan’s never dated a man, and Zafir’s never met anyone who’s game for a Muslim single father with a smart mouth and a GED.

Brennan’s always thought of himself as straight. But when sex is explicitly out of the mix, he finds himself drawn to Zafir for the qualities and interests they share. And Zafir can’t help enjoying Brennan’s company and the growing bond between Brennan and his son. They work well together, but with so many issues between them, doubts creep in, and Brennan’s struggle with his identity could push away the one person he didn’t know he could love.

All the Wrong Places Review:

I was a bit conflicted over this book.  All the Wrong Places by Ann Gallagher is low heat, very little drama and moved rather slowly however the characters were intriguing and there was a certain sweetness to it that I really did enjoy.

I truly had zero idea what asexual meant but basically an asexual person can develop an emotional attachment to someone but has no (or little) sexual interest in anyone.  It was nice to see a unique twist to the story, although I admit without that ‘zing’ between the characters the book lacked a certain ‘oomph’ for me.  I am fine with no on page sex but I admit I do like the chemistry and heat to at least be implied.

The other thing that made the book move sort of slowly was the lack of plot or drama outside of Brennan figuring out who he really was and the slow development of their friendship/relationship. While the story was very well written and the characters nicely developed and  unique, it just didn’t capture my attention and make me want to keep reading.

The author did a great job at showing us how confused Brennan was about his sexuality and I liked how confident and together Zafir was, despite a rocky past. However I think it needed a bit more spark to it to really grab my attention.