In You Are the Reason by Renae Kaye, a total man’s man learns to fall in love with all things pink and sparkly.  This is Book 2 of the Tav series and while it can be read as a stand alone book, I highly recommend you read Book 1 (The Blinding Light) so you get a feel for some of the other characters.  This pots contains affiliate links.

You Are the Reason by Renae Kaye 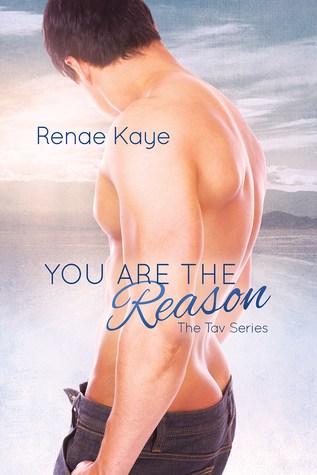 Davo’s a pretty average guy. He has a decent job, owns his own home, and spends his weekends at the pub. He fully accepts that he’s gay, but doesn’t want to be one of those gays who are girly. He likes football and other masculine pursuits, and firmly avoids anything that could be seen as femme—including relationships that last beyond fifteen minutes.

Then Davo’s friend and gay idol not only gets a boyfriend, but also adopts a baby girl. Davo is seriously spooked and scuttles down to the pub. That’s where he meets Lee, cute from her cherry-red hair to her pretty little dress and pointy red shoes. Davo is charmed—but how is that possible? He’s gay. Isn’t he? Then Lee tells him he’s actually a guy—he just likes to wear women’s dresses occasionally. Thoroughly confused about an attraction that’s out of character for him, Davo begins the long journey to where he can accept himself without caring what everyone else thinks.

Let me just say that Renae Kaye is pretty much an auto buy for me because she creates characters that I truly love.  Are they perfect?  No…they all have a few flaws just like real life people.  But the people, situations, and emotions that she weaves into her stories always grab my attention and touch my heart.

In You Are the Reason by Renae Kaye we meet Davo who is a total ‘man’s man’.  Upon first realizing he was gay as a pre teen he unfortunately had a horrible experience with a teacher trying to toughen him up and make him act like less of a ‘girl’.  So, he said goodbye to his beloved My Little Ponies and Barbies and learned to love manly things like tools and football.  Being gay was apparently okay in his mind but being feminine was NOT.  He doesn’t do pink and he stays clear of ‘those gays’ who act too swishy for his liking.

Lee, however, is not only feminine but enjoys dressing up in ladies clothes on occasion.  And does such a stellar job at acting the part of a girl that Davo doesn’t realize he is actually falling for a guy!  Poor Davo cannot figure out if he is actually straight and just never realized it til now.  It was actually very amusing to read about his sexual confusion, especially since his brief early hookups with Lee were when he was drunk so his mind is a little fuzzy about the details.

Basically, You Are the Reason is a story about falling in love.  Davo has to overcome a few hangups about pink and glitter but eventually he is embracing all the girly things he once was so afraid to accept.

I loved Lee’s character.  He was so confident about who he was.  Sexually male.  Attracted to men.  Loves high heels and sparkly eye shadow occasionally.  But, still obsessed with football and happy to be out and about as a guy on a regular basis.  I loved that the author used the book to raise a bit of awareness about GLBTQ issues and how hard it is for teens to find a safe and accepting place to be themselves.

I didn’t like Davo much at first.  His obsessive anti ‘girly stuff’ attitude was a bit irritating but the author did move his thought processes along fairly quickly.  Maybe his change of heart came about a bit TOO quick but I don’t think I would have enjoyed the story as much if he was a jerk for much longer.

There were honestly several parts of this book where I laughed out loud.  Baby Maxine was adorable and seeing Davo learn to deal with baby bottles and stinky diapers was hilarious.  I loved Davo’s obsession with his magic 8 ball and thought that was a very unique twist to the character.

I did think that the situation with Cynthia towards the end was a bit abrupt.  It did bring Davo’s true feelings for Lee to light but it seemed a tad bit out of place.  Maybe this scene and the characters involved will play a part in future stories in the series?  Just seemed like that scenario didn’t fit with the rest of the book.

Overall, I think You Are the Reason by Renae Kaye is a wonderful book and I am looking forward to seeing more of all of these characters in the future!