If you love bodyguard romance novels, you need to read Guarding Mr. Fine by HelenKay Dimon.  In this steamy novel of seduction and international intrigue, two brave men are stripped of their defenses—and exposed to dangers and desires that simmer below the surface.  I received one copy of this book at no charge in exchange for my honest reviews but all opinions expressed here are my own.  This post contains affiliate links. 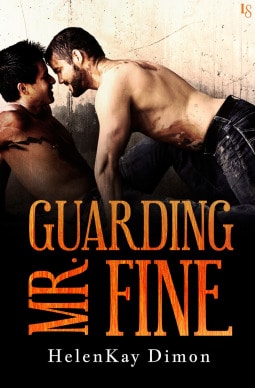 As an agent with the CIA’s special activities division, Seth Lang lives for risk—and yet he’s stuck playing bodyguard to the U.S. consul general in Munich. Although Seth’s last assignment nearly killed him, babysitting some desk jockey in a suit sounds way too easy. But when he lays eyes on the new top man, tactical expert Rick Fine, Seth’s thrilled to see just how hard this job is going to get. Mr. Tall, Dark, and Quiet has a body worth guarding—and he requires hands-on attention day and night.

Dispatched to a German consulate to expose the murder of his predecessor, Rick finds himself in an extremely vulnerable position. He needs a man like Seth—in so many ways. This mission will inevitably plunge them both into jeopardy, but each new threat only brings them closer. Rick just hopes that he can keep his deepest, darkest secret hidden—or else risk imperiling a relationship they’re both fighting for their lives to protect.

Guarding Mr. Fine by HelenKay Dimon is a deliciously captivating romantic thriller. If you enjoy bodyguard romance novels, this one should be on your list of books to read.  This is book three of the Tough Love series but I have not read the other two and understood the story just fine.

Seth is a man of action and having just left a harrowing assignment that almost killed him, he does not want to babysit some desk jockey.  He is gruff and snarky with a protective streak a mile wide.  He says he is just doing his job but guarding Rick Fine becomes something much more than a paycheck.  Seth struggles to keep Rick at arm’s length, though, while guarding his heart along with his new assignment.

Rick is actually much more than a desk jockey and he desperately needs Seth’s help.  The former German consulate was murdered and there are some seriously dangerous forces at play in this book.  He has a secret, though, that will drive a wedge between him and his new bodyguard.  And since he is beginning to care way too much about the guy, that means heartbreak is a definite possibility.

One thing I really loved about this story is that Rick was (mostly) honest with Seth about his role in the consulate.  He let him know up front that he was more than a desk jockey and could hold his own when push came to shove.  Yes, he did keep a few key facts to himself which does create a bit of drama at the end of the story.  But, these two guys work as a team to uncover what is really going on behind the scenes of the consulate.

The plot is well thought out and I won’t give away the details.  You will have to read it yourself and I highly recommend you do!  Great writing, wonderful snarky banter between two strong and sexy men, and a nice cast of supporting characters as well.

The chemistry between Seth and Rick is off the charts.  It draws you in and heats you up while giving you just enough warm and fuzzies to make it so much more than just sex.  The pacing of the book was awesome.  Yes, you have a very early slightly anonymous sex scene but after that, the plot takes over and while the sex is there, it doesn’t overpower the storyline.   You will get a happily ever after once they get through some minor drama and I finished the book with a smile.

Overall,  I really enjoyed Guarding Mr. Fine by HelenKay Dimon and definitely recommend that you add it to your ‘must read’ pile of books.  Especially if bodyguard romance novels are your cup of tea!

Bodyguard to a Sex God by RJ Scott

Other books by HelenKay Dimon