In Treble Maker by Annabeth Albert, Cody Rivers is determined to be a rock star.  Joining an a cappella group for a new singing competition show could be his last chance at real fame—unless the college boy from the heart of the country messes it up for him.  I received one copy of this book at no charge through Net Galley in exchange for my honest opinion.  This post  contains affiliate links. 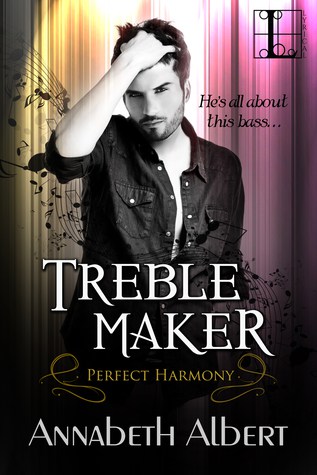 Cody Rivers is determined to be a rock star, but couch-surfing between bar shows gets old fast. Joining an a cappella group for a new singing competition show could be his last chance at real fame—unless the college boy from the heart of the country messes it up for him. Lucas Norwood is everything gothy, glittery Cody is not—conservative, clean-cut, and virginal. But when a twist in the show forces them together, even the sweetest songs get steamy as the attraction between them lights up the stage. Lucas wants to take it slow, but Cody’s singing a different tune—and this time it may be a love song…

Treble Maker by Annabeth Albert is all about an a cappella singing competition with some pretty high stakes.  Cody Rivers is determined to be a rock star but spends an awful lot of time living on his friends’ couches and in his van as he tries to make it big.  Lucas Norwaood is a clean cut country boy with a great voice but 2 left feet.  Unfortunately, a good voice is only part of what he needs to make it big in this competition.  A twist of voting and judging has Cody and Lucas working together for a shot at stardom but things do not go smoothly, even as they start to give in to the attraction between them.

Cody’s character was hit or miss with me.  He showed signs of being a really great guy, however he also showed signs of being a bit of a jerk as well.  He was sweet to help Lucas overcome his two left feet but he had a ‘ME< ME< ME’ attitude that I didn’t care for at all.  The snarky, Goth persona really fit him, though, even if I didn’t always like that he put himself before everything else.

I wasn’t all that thrilled with Lucas all the time either.  He had a bumbling shyness that was sortof cute, however the whole ‘saving myself for marriage’ thing came off a bit uptight to me.  Of course, while he may be ‘virginal and pure’ he craves rough and dirty which really terrifies him.  But, when things finally start to move along with Lucas and Cody, there is no ‘gentle handling’ which made the sex scenes themselves fairly hot!

The story is told in both character’s point of view, which I really appreciate.  You get to see inside each character’s head a bit to really understand how they are feeling.  The book is very well written, although I did think it was maybe a tad too long.  There is a lot of story that strictly involves dancing and choreography.  While it was interesting, I found myself wanting to move on to the parts of the story that really focused on the characters themselves.

Overall, though, Treble Maker by Annabeth Albert is a really solid story.  Plenty of secondary character development, lots of buildup in the heat between the main characters, and a nice conclusion that I think was actually realistic.  I think the story starts out a little bit slow but by half way through the book I was really engaged and couldn’t wait to see how these two guys made things work. Treble Maker by Annabeth Albert is definitely a book I recommend!