In Two Howls by Sean Michael Max is on the run, but is he running from his past, or toward his future? Only Ulf knows…Two Howls is a classic Sean Michael story with a simple plot, plenty of sex, and a happily ever after.   I received a copy of this book at no charge in exchange for my honest review. 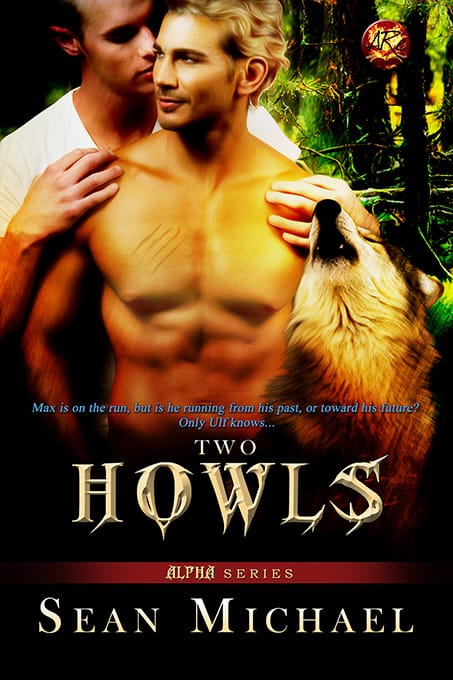 Max is on the run, but is he running from his past, or toward his future? Only Ulf knows…

Werewolf Max knows desiring males is wrong, but he can’t help himself. When his pack nearly kills him in an attempt to cleanse him, Max runs. Jumping on his motorcycle, he heads north.

Ulf has lived on his own in the wilds of Northern Ontario for a long time. When he catches the scent of a stranger in his territory, he’s angry at first, until he realizes that Max is more than just another werewolf. They’re mates.

Ulf must make Max believe that two males can be mates, but just as he’s about to succeed, Max’s past catches up with him. Will the home they’ve been hoping to build together be lost for good?

Max is on the run from his pack in Miami.  He has spent his entire life abused and tormented for being gay.  He comes from a conservative pack that firmly believes that there cannot be any gay shifters.  He has taken his bike as far north as he can before exhaustion forces him to find shelter.

Ulf is a solitary wolf living far from civilization in an isolated cabin on plenty of land. He scents a new wolf in his territory and is shocked to realize that Max is his mate.  He is determined to protect him from his enemies and make a life for the two of them forever.

When trouble finally finds them, they work as a team to bring them down and send the Miami pack a message that they will not soon forget.

Two Howls is a quick and easy read.  It starts just as the two meet for the first time and Ulf claims Max as ‘his’ almost immediately.  He is 100% alpha and Max is adorably clueless about being with a guy.  Or, even being part of a pack…even if there are only two of them.

This book is definitely heavy on the sex and light on the plot details.  Not that it is poorly written, just not very complicated.  There was a lot of sexual exploration, getting Max to learn how to play and relax, and a nicely wrapped up conflict at the end.  They spend a lot of time in wolf form and even as ‘human’ males they seemed to act very ‘wolfy’…lots of yipping, dominance play and sniffing.

Without giving away any details….I was curious about the discovery that was made about Max that was never brought up again or explained further at the end of the book.  Maybe there will be a continuation of the story where we learn why max was so important to his pack in Miami?  I did find myself wondering about the men themselves.  They didn’t seem to have any hobbies, jobs, or passions outside of being a wolf.

Overall, if you are looking for a quick and easy read with plenty of heat, Two Howls is a good choice!

Often referred to as “Space Cowboy” and “Gangsta of Love” while still striving for the moniker of “Maurice,” Sean Michael spends his days surfing, smutting, organizing his immense gourd collection and fantasizing about one day retiring on a small secluded island peopled entirely by horseshoe crabs. While collecting vast amounts of vintage gay pulp novels and mood rings, Sean whiles away the hours between dropping the f-bomb and pursuing the kama sutra by channeling the long lost spirit of John Wayne and singing along with the soundtrack to “Chicago.”

A long-time writer of complicated haiku, currently Sean is attempting to learn the advanced arts of plate spinning and soap carving sex toys.

Barring any of that? He’ll stick with writing his stories, thanks, and rubbing pretty bodies together to see if they spark. 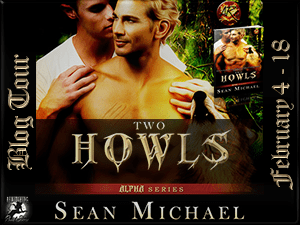 CONNECT WITH THE AUTHOR