If you love a good vampire romance book, A Vampire’s Heart (Ellowyn Found Book 1) by Kayleigh Sky  should be on your list of books to read.  This gay romance has awesome plot, mystery, passion, and world building.  I am really looking forward to the next book in this series!

A Vampire’s Heart by Kayleigh Sky 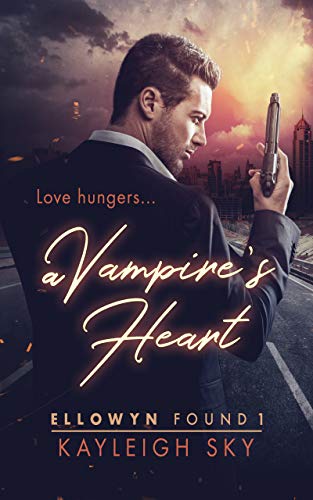 Other Books by Kayleigh Sky:

Read other books by Kayleigh Sky on Amazon at the links below.  She has more gay vampire romance books in this series coming out this year!

About A Vampire’s Heart:

Otto Jones, a cop assigned to the seemingly random murder of a vampire, would rather hide out in the nearest bar than waste his time on a dead vamp. He hates the bloodthirsty demons. But when the king of the vampires commands him to work with one of the lesser princes and find the killer, he has no choice.

Prince Jessamine Senera is ready to sacrifice his happiness in a loveless marriage for his family’s benefit… but not yet. He dreams of adventure, excitement, and true love. He lives on romance novels and detective stories and wishes he could drink synthetic blood like every other vampire. But he can’t. He needs human blood to survive and is hated by vampires and humans alike.

As Otto and Jessa draw closer to an entity that doesn’t want to be discovered, Otto finds the heart he thought long dead opening to the romance-loving Jessa. No good can possibly come from falling in love with a vampire, but when a shadowy assailant attacks Jessa, Otto will descend into the darkest pit of the earth to rescue him.

If you like vampires, mythical and urban settings, intense suspense, and happy ever after, then you’ll love this first book in the dark and mysterious Ellowyn Found trilogy!

A Vampire’s Heart is a stand-alone paranormal dystopian noir romance with a satisfying conclusion to the love story and a central mystery that weaves the trilogy together.

My Review of this Vampire Romance Book

I can honestly say that A Vampire’s Heart by Kayleigh Sky has got to be one of the best vampire romances I have read in quite some time.  This is the first book of the  Ellowyn Found trilogy and my first book by this author.  I will certainly be reading more of her work in the future!

The author does an amazing job of creating a unique world where vampires and humans coexist, even though it isn’t exactly a peaceful relationship.  I won’t get into too much detail about the world she creates, however, she builds everything from vampire origin theories to the recent upheaval of the earth’s crust that thrust them into human society.  It was truly a well thought out world and one that I felt was very distinct.

Here is where I think Kayleigh Sky’s creativity really shines.  Otto is sort of the classic bitter, angry cop with a tragic history.  He battles his own feelings of loss, his frustration with a broken justice system, the hostility he feels towards the vampires, and a growing addiction to alcohol. I liked his character, although I would have liked to see him pull himself out of the bottle and his own misery a little faster than he did.

Jessa was an amazing character and I absolutely loved him.  Otto labeled him ‘the baby prince’, however, while he was definitely sheltered, he had an amazing inner strength as well.  I loved his passion for nature and romance, his childlike joy at simple things like movies and popcorn, and his loyalty to his family.

There are many secondary characters as well, all very well developed, who will play a major roll in this vampire romance book.  I can’t wait to see the next book as I assume it will be Isaac’s story and I SO want him to get his happily ever after!

This is a slow burn, enemies to lovers romance book.  A Vampire’s Heart is a LONG story so you are not going to even have a hint of relationship development for quite some time.  But, it is a beautiful progression that felt very natural.  And when they finally give into their passion, it is sweet and hot and just makes you melt.  Otto has a dirty mouth and Jessa is both embarrassed and turned on by it.

Central to this entire paranormal romance is the mystery and the author builds the story from the first chapter all the way to the last.  I took off a small bit of the rating on this book because I did get a bit lost occasionally.  There are multiple royal families, a couple of murders, a missing person, a lot of information about art and jewelry, and several other facets to the story.  However, the story really caught my attention and kept me intrigued all the way through the book. While Jessa and Otto get their happily ever after, the story itself will be continued in the next book of the trilogy.

A Vampire’s Heart by Kayleigh Sky is a fabulous gay romance book if you love sexy vampires, intriguing mysteries, and the friend’s to lovers trope.  Check out  A Vampire’s Claim by Jordan Ashton if you love a good vampire story.

Buy this A Vampire’s Heart on Amazon!